On a prominent site along Copenhagen’s Inner Harbour, a stretch of water loved for its swimming, restaurants, and famous library, a green park will blossom where apartment buildings were once planned thanks to shipping giant Maersk.

Located on the southern portion of Dokøen, a small island that was formerly part of the Royal Danish Navy dockyards, the Opera Park, or Operaparken, will add a landscaped counterpoint to the glass, steel, and concrete of the neighboring Opera House. This project will convert what is now essentially a blank slate – a windswept expanse of flat land covered by grass, a few trees, and pavement – into a 21,500-square-metre intricately designed urban oasis.

The plan by architectural firm COBE, selected in 2019 through a design competition, features 80 different species of vegetation spread across hilly terrain. It also includes walking paths, waterfront promenades, seating, ponds, a shoreline terrace stepping down to the water, public toilets, and a cafe. 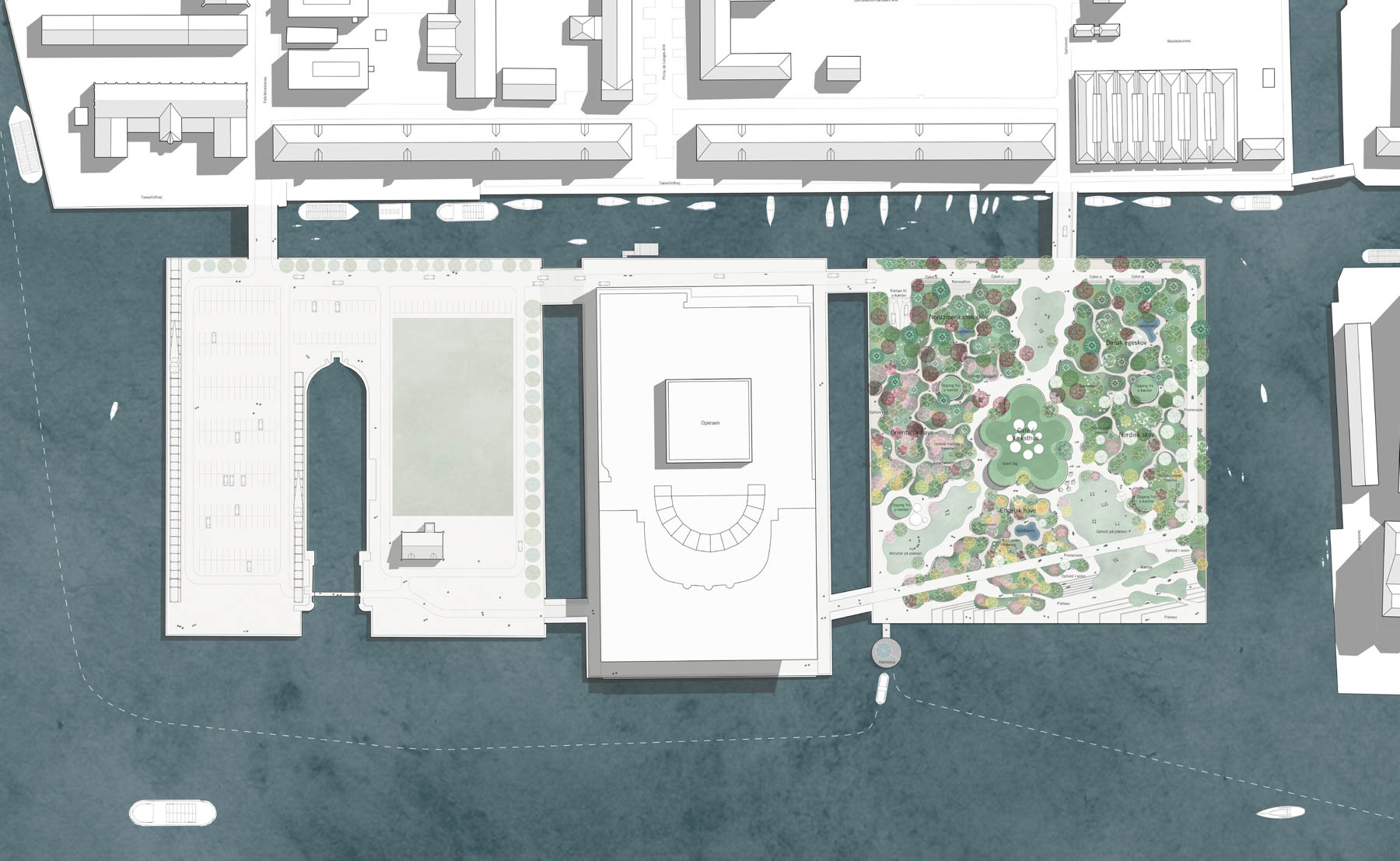 A park for all seasons, its trees, shrubs, plants, and flowers will comprise a varied palette of colors and shapes that will be arranged into six zones: English Garden, White Nordic Forest, Red North American Forest, Oak Forest, Cherry Grove, and Tropical Greenhouse. In what seems likely to be an Instagram favorite, tree heights of this mini-forest will increase from west to east, creating a sense of depth when viewed from the other side of the harbor.

The goal of this park is to provide not only a new major public space but also a micro-environment that will provide habitat for birds and insects, acting as an urban green lung. In the best tradition of landscape architecture, it will be a constructed natural environment supporting biodiversity, in an age where that is more necessary than ever.

It is also interesting to consider what this plan is not. It is not an open plaza placed adjacent to a major civic building, such as the one in front of Copenhagen City Hall. Winds off the water make that a less inviting option and aesthetically the side view of Opera is not particularly impressive as it was originally envisioned that new buildings would sprout from this fertile piece of real estate.

Instead, the trees, the greenhouse pavilion with its glass walls and roof resembling a flower, and the hills will provide a “volume” that complements its monumental neighbor, but contrasting it with a more fine-grained, human-scaled character.

Parking at the Park

While Dokøen is in the geographic heart of Copenhagen, there’s no Metro or train station nearby. As a result, the Opera House has come to be a car magnet. Opera Park is an effort to ameliorate that and will feature a 300-space underground garage.

The garage will provide a direct connection to the venue, allowing opera-goers to stay inside on rainy or snowy nights. But, to paraphrase an old saying: if you can’t bring the motorists to the park, bring the park to the motorists.

In this case, the greenhouse will extend down from the park to the garage level, providing a vertical connection between the site’s two layers. An added benefit of this new garage will be the closure of an existing parking lot north of the Opera House where new mixed-use buildings can be developed in the future.

Park and parking will also be linked financially, as revenue from the garage will be dedicated to the park’s operating budget, raising an interesting public policy question: Is getting drivers to subsidize a green public park progressive? Or does it create an incentive to keep the cars coming?

A collaboration that wasn’t always a walk in the park

While cars will pay for the operating expenses, boats are providing the construction funding in the form of a gift from the A.P. Møller Foundation and its chair, Ane Mærsk McKinney Uggla. The foundation, which is named for Uggla’s grandparents, is the charitable arm of Maersk, the shipping conglomerate controlled by her family. With the Opera Park, she is following the path of her late father, Mærsk Mc-Kinney Møller, who built the Opera House – an episode that offers a cautionary tale about the potential pitfalls of privately funded public projects.

The Opera House, which was completed in 2004, is a world-class facility and the generosity of the donation – to the tune of about a half a billion dollars – was widely appreciated. Nevertheless, some expressed concerns that this major project, which faces Amalienborg Palace and requires ongoing public subsidy, reflected one man’s vision – a paradigm at odds with the values of a social-democratic society.

As Møller was famously quoted, the Opera was “a gift, not a gift card.”

This led to conflicts over the building’s design, which became as dramatic as any performance on its stages. The gift-giver hired Denmark’s leading architect at the time, Henning Larsen, but then imposed several design changes. As a result Larsen publicly repudiated Møller as a meddler who knew nothing about architecture and called facade alterations ordered by his client “my greatest defeat.” The architect lamented that contractual obligations prohibited him from quitting the project.

It will be interesting to see how Opera Park unfolds. Will Ane Uggla and COBE leader Dan Stubbergaard learn from the past and forge a more harmonious collaboration? For the sake of the rest of us, let’s hope for a happy ending.