Just what is the big deal about coffee in Sweden? Like all good Scandinavians, Swedes love their coffee; they’re actually among its highest consumers in the world. Swedish coffee is not just a drink, it’s a way of life. The Swedish custom of fika has been cultivated around the hot drinks, and there’s even a special brew made with eggshells (more on that later!).

This has lead to an all-encompassing and quality-obsessed coffee culture in Sweden, including micro-roasters, lots of wonderful cafes, and of course, loads of delicious coffee to try both in-store and at home.

Swedes love their food and drink; so much so that they’re willing to eat surströmming, one of the stinkiest foods in the world. They don’t, however, tend to pair it with coffee: that honor goes to baked goods.

So, what is Swedish coffee culture and how can you partake? We’ll tell you! We even have a few cafés in Stockholm, Gothenburg, and Malmö to recommend.

A brief history of coffee in Sweden

Sweden has an interesting, and almost comical, history with coffee. The first beans arrived in 1685, three decades after Statesmen Claes Rålamb became the first Swede to chronicle the beverage (he hated it). Initially, however, coffee was not being imported into Sweden as the ubiquitous morning pick-me-up. Rather, it was used for medicinal purposes and stockpiled by pharmacists to treat disease.

Swedish King Charles XII is the one responsible for introducing coffee as a pleasurable beverage to the public. After developing a taste for it while visiting Turkey, Charles brought some Turkish coffee back to his kingdom, along with the traditional cezve coffee maker.

King Charles’s affinity for coffee would ignite what would become Sweden’s love affair with the drink which, at the beginning, was reserved for the aristocracy. Thank goodness things are different now! 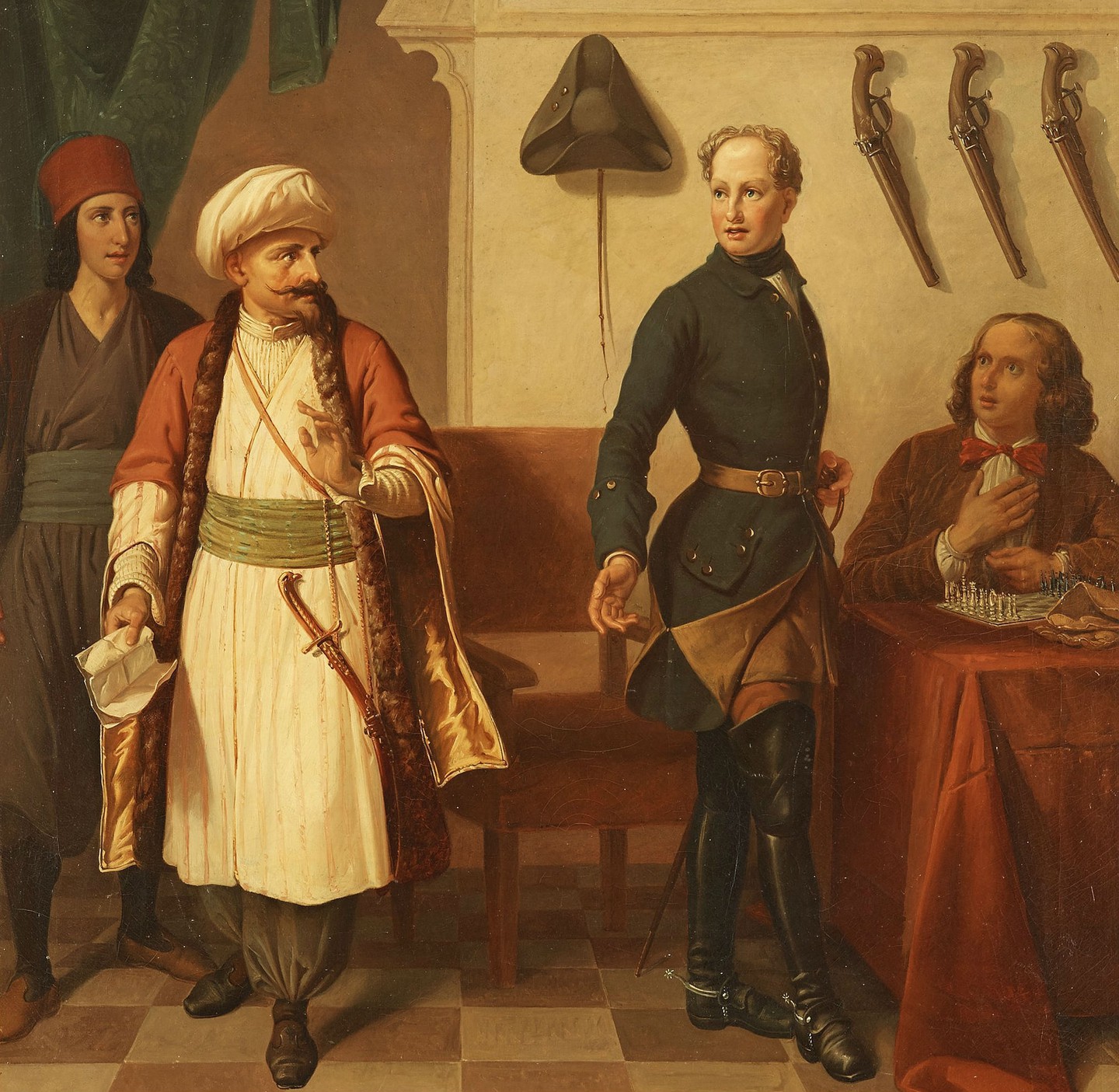 In 1710, Stockholm opened its first coffee house and, within a few decades, had nearly fifty city-wide. Coffee’s growing popularity worried a group of elites who believed that Sweden should reduce imports and increase exports, an economic policy known as mercantilism. At the same time, the Swedish working class, who couldn’t afford coffee, were pissed about a prohibition on home distilling. So, in 1756 the first of five coffee bans were enacted and enforced by, you’ll never guess…the Swedish peasantry. Punishments included fines, having one’s cups and saucers taken away, and later, imprisonment. While the first ban was the longest, lasting 10 years, the bans under King Gustav III were really something special.

King Gustav III hated coffee and was intent on demonstrating that the drink was bad for one’s health. So, in addition to convincing the Swedish botanist and avid coffee drinker Carl Linneas to write a dissertation on the negative effects of coffee, Gustav commissioned what is now jokingly called “Sweden’s first clinical study.”

The king ordered two identical twins, condemned to death, into his very own research trial. One twin would drink an absurd amount of coffee daily while the other twin was forced to drink tea. Let’s just say that everyone but the coffee drinker died before the “study” was ever concluded. The first to go were the supervising physicians, followed by King Gustav III, then the tea-sipping brother, and finally the coffee drinking rebel. 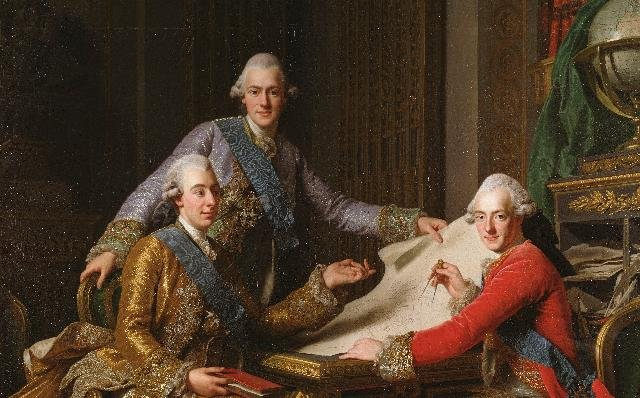 Above: The king who hated coffee, Gustav III, and his brothers

The fifth, and final, coffee ban ended in Sweden in 1822. None of the bans were truly successful. Swedes were already well on their way to becoming the coffee loving nation they are today.

In no part of Swedish society is coffee more integral than to the communal ritual of fika. Fika is one of those words that can be difficult to translate. Loosely it means a “coffee and cake break” but that hardly captures the social significance of the term. Fika is the Swedish ritual of slowing down. It’s always social – fika is not something that you do by yourself – and typically involves a cup of coffee and a sweet bite to eat.

Friends have fika, colleagues have fika – many corporations actually mandate the time to do so. You can fika multiple times a day for as little as ten minutes each. The important part is that you’re not alone and have a cup of coffee in-hand. 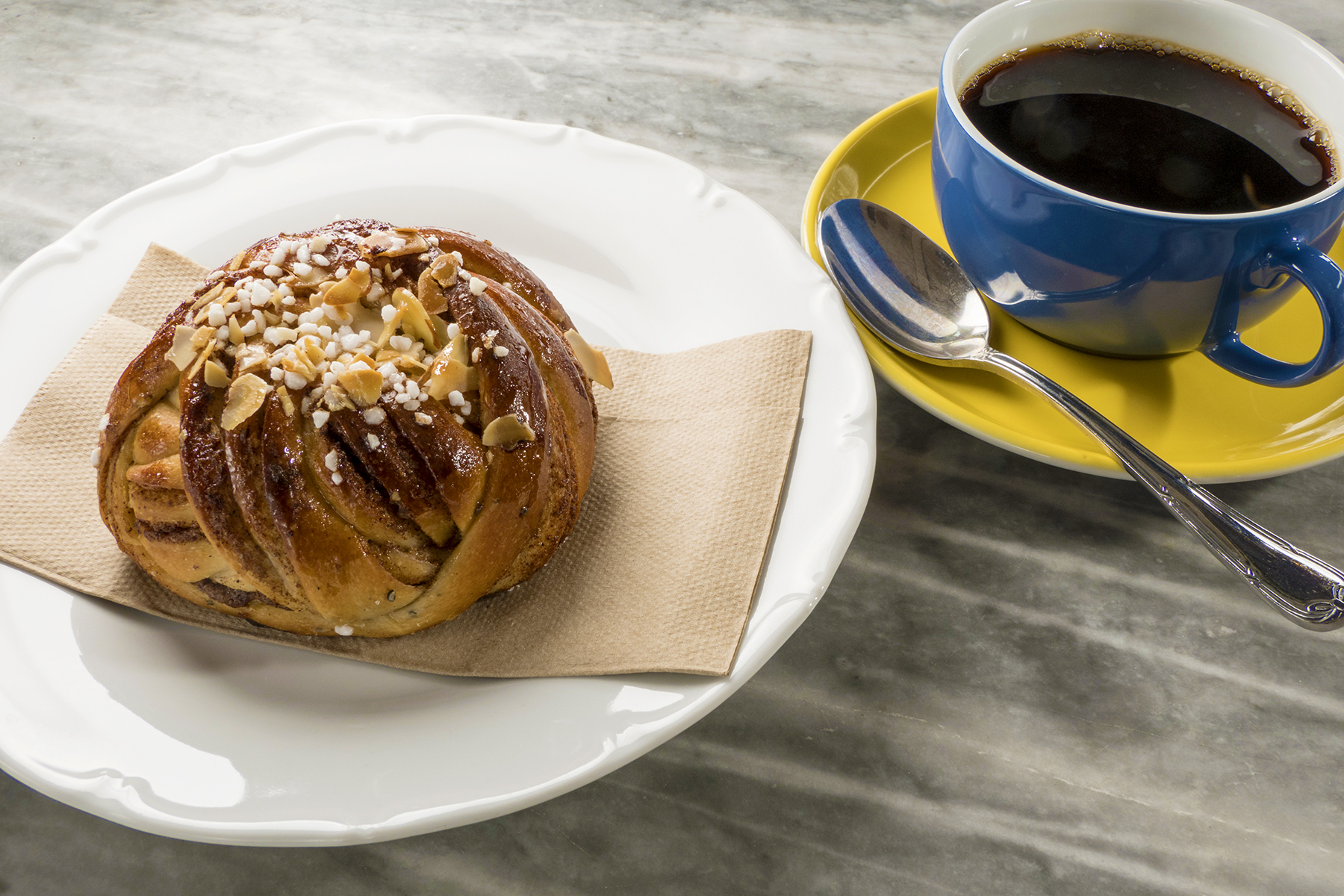 Although “Swedish” is in the name, you won’t find this egg coffee on any menu in Sweden. It is, however, believed to be invented by Swedish immigrants sailing across the Atlantic.

Mixing a raw egg, shell and all, into coffee grounds made the coffee last longer. The proteins in the egg also makes coffee taste less bitter and helps to provide an extra caffeine boost.

We, frankly, don’t recommend trying this at home.

Looking to grab a cup of some of Sweden’s finest? Then give one of these coffee shops a try!

The Best Coffee Shops in Stockholm

Not only is Drop Coffee located in Stockholm’s uber-stylish Södermalm neighborhood, the roastery’s managing director, Joanna Alm, is a three-time Swedish Coffee Roasting Champion and former world’s second-best roaster. It’s among the go-to spots for the well-dressed, laptop-and-coffee crowd.

At their award-winning boutique cafés, Johan & Nyström brew hand-roasted, ethically-sourced beans from across the world. Their espresso-based beverages are a notable favorite. Johan & Nyström also has a concept store in Gothenburg. 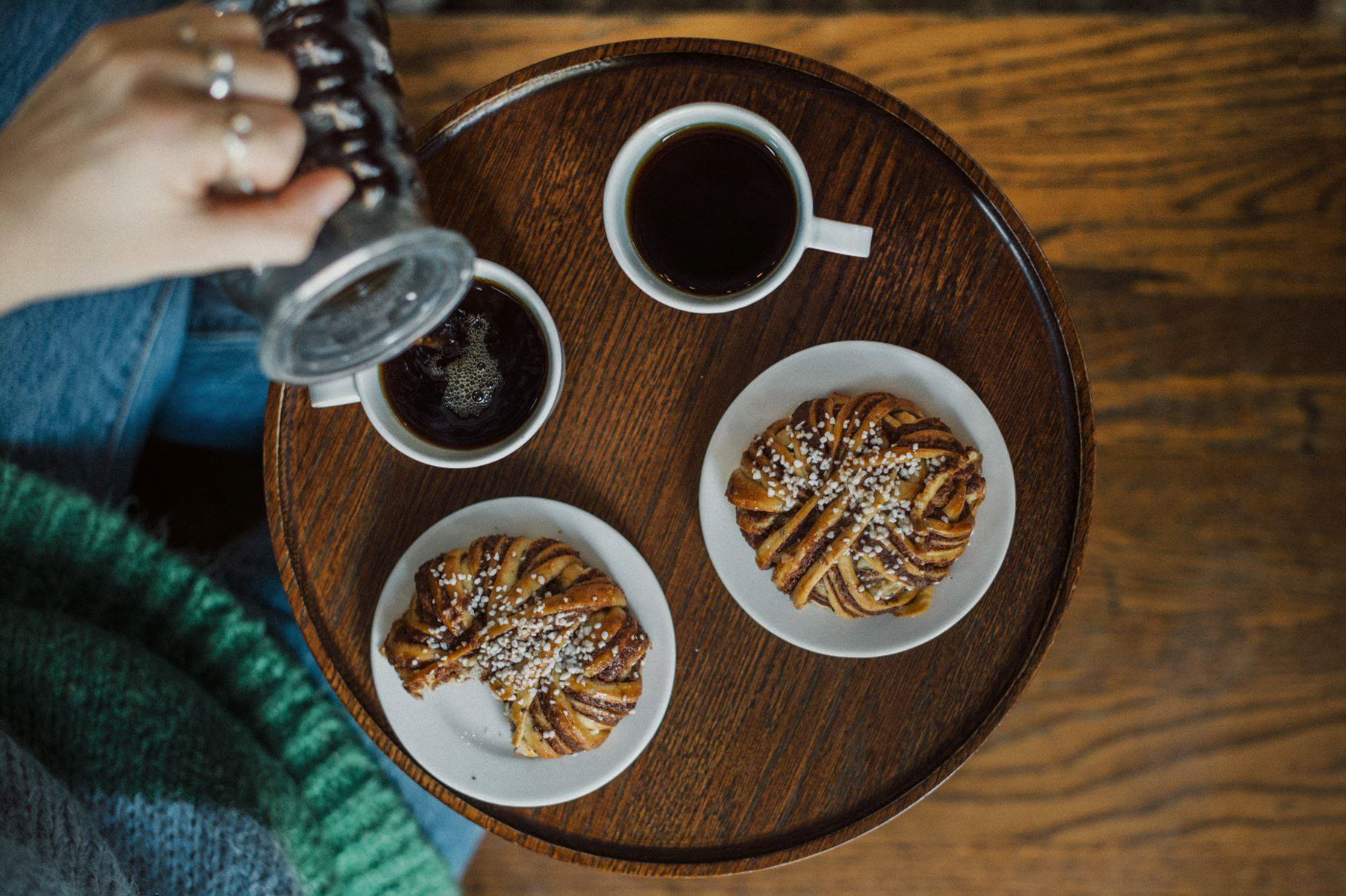 Kaffebar, formerly Mellqvist Kaffebar, always tops of the list of Stockholm’s best cup of joe. It’s cozy, crowded, and full of regulars. That’s the best kind of endorsement we know.

In addition to being one of Stockholm’s preferred vegan and vegetarian cafés, Pom & Flora makes wonderful coffees. They have locations in two of city’s coolest enclaves. Bonus: dogs are welcome at both locations.

The Best Coffee Shops in Malmö

This corner coffee shop is known for having the best cup of coffee in all of Malmö. Their croissants are also famous and best enjoyed while people watching in, or outside, the brightly-lit café.

Another local favorite, Söderberg & Sara’s brews flavorful javas and fine teas in a cozy five-table bakery. It’s a hub for digital nomads, so get there early if your heart is set on snagging a table.

Set in the heart Gamla Staden, Malmö’s historic district, Noir Kaffekultur is the perfect place to fika away from the crowds. The charming café is family-run, bakes homemade bread and serves up a full-bodied espresso that will not disappoint.

For more on where to eat in Malmö check out our guide to the best brunch in the city.

The Best Coffee in Gothenburg

Started by a brother-sister duo, Alkemisten Kaffebar is located on the island of Hisingen in Gothenburg, Sweden. The café uses Ritu Coffee Roasters beans whose co-founder Anthony Nguyen won the Swedish Roasting Championship in 2019.

This small coffee bar is known for its rotating art collection, stylish patrons, and high-quality roasts. Pastries and small bites are also available. Viktors’ is one of the places to see and be seen in Sweden’s second largest city. 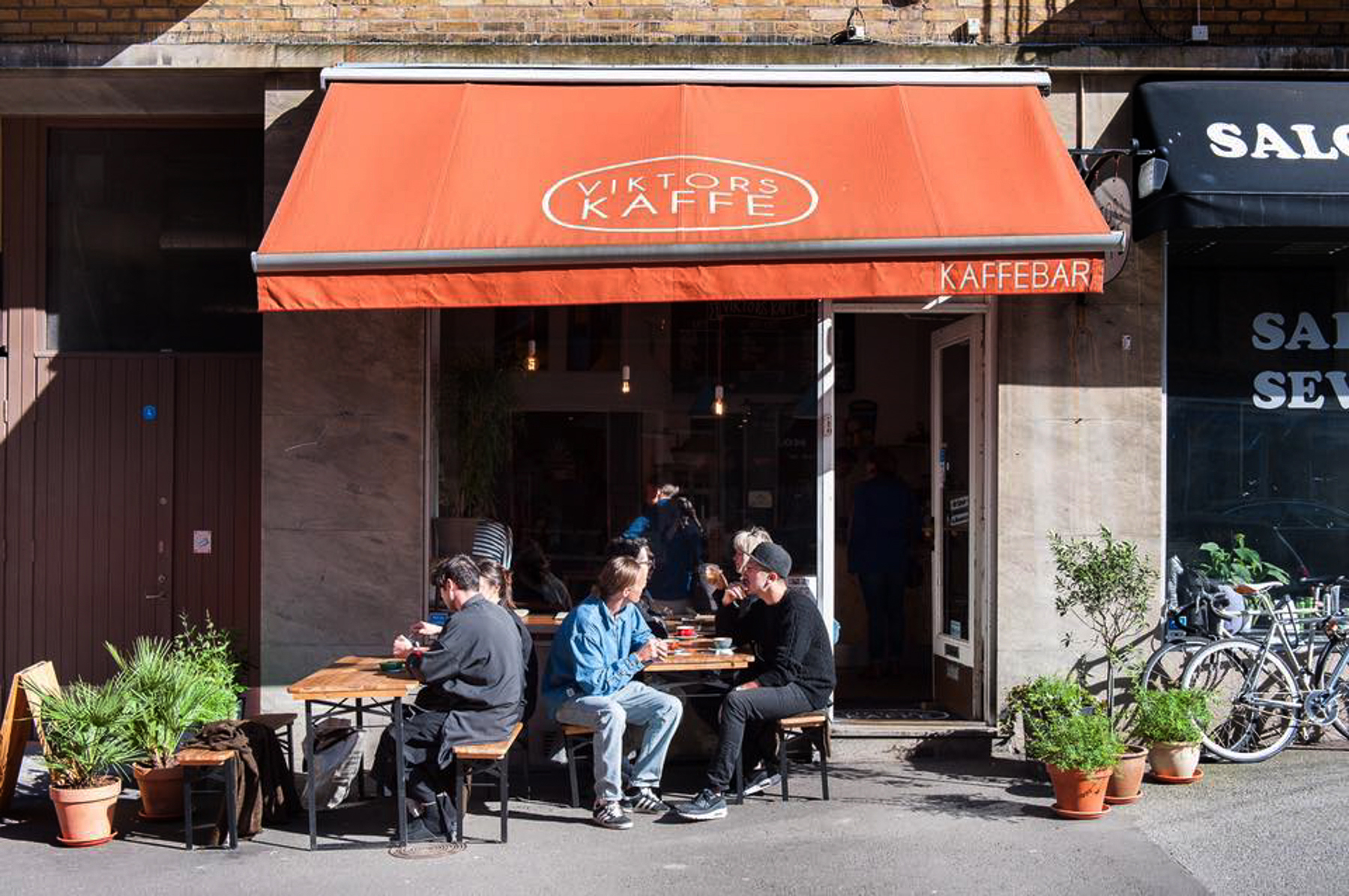 da Matteo was the first to serve specialty coffee in Gothenburg and, over the past two decades, has expanded to five cafés and two boutiques across the city. The original is in Victoriapassagen where da Matteo first opened in 1995.

Housed in a crane in the heart of Gothenburg’s harbor, this local micro-roaster looks more like a graphic design firm on social media than a purveyor of fine coffees. But Morgon Coffee Roasters produces only small-batch coffee and even ships worldwide. (The coffee, and packaging, makes for a great gift).

The Best Coffee in Lund

Ask anyone about the best coffee in Lund and they’ll point you to the micro-roaster Love Coffee. Specialty coffees. Scandi interiors. Need we say more? 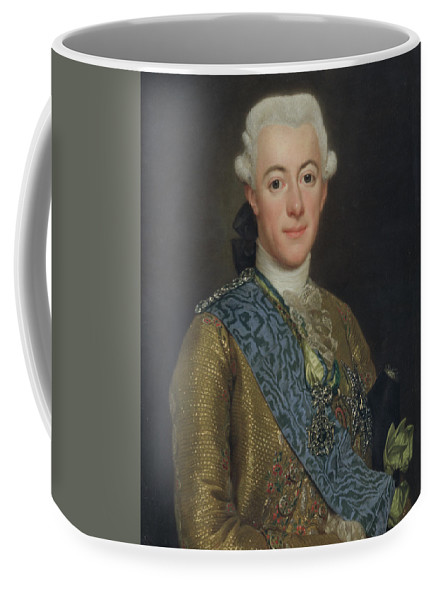 Want more coffee in Scandinavia? Check out our lists of the best coffee in Copenhagen and Helsinki, as well a deep dive into Norwegian coffee culture.