The Scandinavian Design List is a tribute to all the inspiring design work that is coming out of this region. In this series, we put the spotlight on some of the most interesting latest releases.

The February edition of the Scandinavian Design List is led by Stockholm Design Week, a major highlight in every design enthusiast’s calendar. While this year’s event will be a digital format, it has been organized with as much passion as always. Get your dose of Scandinavian design inspiration below!

Here are the best Scandinavian design releases this month:

Swedish design company and furniture producer Fogia is joining forces with Danish design agency Norm Architects. The table range Koku calls on American/Japanese craftsman, architect, and designer George Nakashima. Koku is named after the island of Shikoku on which the inspiration for the tables were born during a studio trip in 2019 to study Nakashima’s work and legacy. The tables are made of a combination of solid wood and metal tubes allowing for an interesting contrast of dimensions and proportions. Choose between two sizes and a number of finishes and you might have found that perfect side table on which you can arrange your favorite objects.

MENU’s popular Échasse Collection is now also available in the color Amber, reflecting the interior world’s flirt with warm brownish tones, a throwback to design of the 1970s.

The series of glass vases and bowls that form this collection is inspired by laboratory test tubes. By suspending mouth-blown glass shapes on brass frames, designer Theresa Rand gives the pieces a sense of lightness while ensuring stability. If you have been keeping an eye on this collection for a while but couldn’t quite get on board with the existing color-range, then this might be your chance.

Looking to brighten up your home with a pop of color? Established in Denmark in 2019, St. Leo is all about paint and plaster that elevate architectural spaces. The new paint line Original Pigments consists of three wall and ceiling paints and three wood and metal paints in an initial palette of 16 colours which will be expanded to 80 colors by spring. All colors are mixed by hand and with a strong focus on sustainability in their Copenhagen studio.

Norwegian mat-maker Heymat is partnering up with Swedish colorist and interior designer Tekla Evelina Severin to present a brand new edition of its first and most popular rug „Mix“ that was initially launched in 2016. Tekla Evelina Severin is regarded as one of the design world’s most influential figures and mostly known for her strong color compositions and graphically playful artistic expressions. Her interpretation of “Mix“ features a contemporary color scheme in earthy pastels, a nod to the 70s color palette, gemstones, and the Mediterranean. The rugs are made from 100% recycled plastic and highlight that sustainability-focused design can still be playful.

August Sandgren: On The Go

From its headquarters in Copenhagen, Danish heritage brand August Sandgren has set out to declutter our homes, offices, and minds. Inspired by August Sandgren’s impeccable work as a bookbinder and box maker, the company focuses on high quality storage solutions. The new “on-the-go“ collection is approaching this topic from a slightly different angle by creating three essentials for the life on-the-go, be that locally or globally: Totebag, Washbag, and PC cover keep your most important belongings save and at arm’s length.

The Totebag is a hybrid between the IKEA bag and the handbag, and best used where you would otherwise go for one or more cotton bags. The Washbag is essentially a classic toiletry bag but with a twist – it’s washable at 40 C degrees, thus, easy to keep clean even if you spill tooth paste allover. Lastly, the PC cover is designed to match the rest of August Sandgren’s pieces to make sure you don’t lose style points in hectic everyday situations.

Sounds like something you need?  Scandinavia Standard readers can get 25% off these August Sandgren products with the code SCANDI25, for the month of February only.

Stockholm-based Massproductions is launching its new sofa BAM! in a creative sound experiment with local music producer Axel Boman, building on a tradition to invite exciting Swedish music creators to meet the furniture world during Stockholm Design Week. In the end of last year, Massproductions sent a prototype to Axel’s studio so that he could interpret the piece in an audio production. The result is a balance between rhythmic and abstract elements, played by one of Sweden’s most acclaimed jazz drummers, Konrad Agnas. The sofa itself is shaped by clean lines and has a somewhat solid built. Who would have thought that furniture can inspire music? 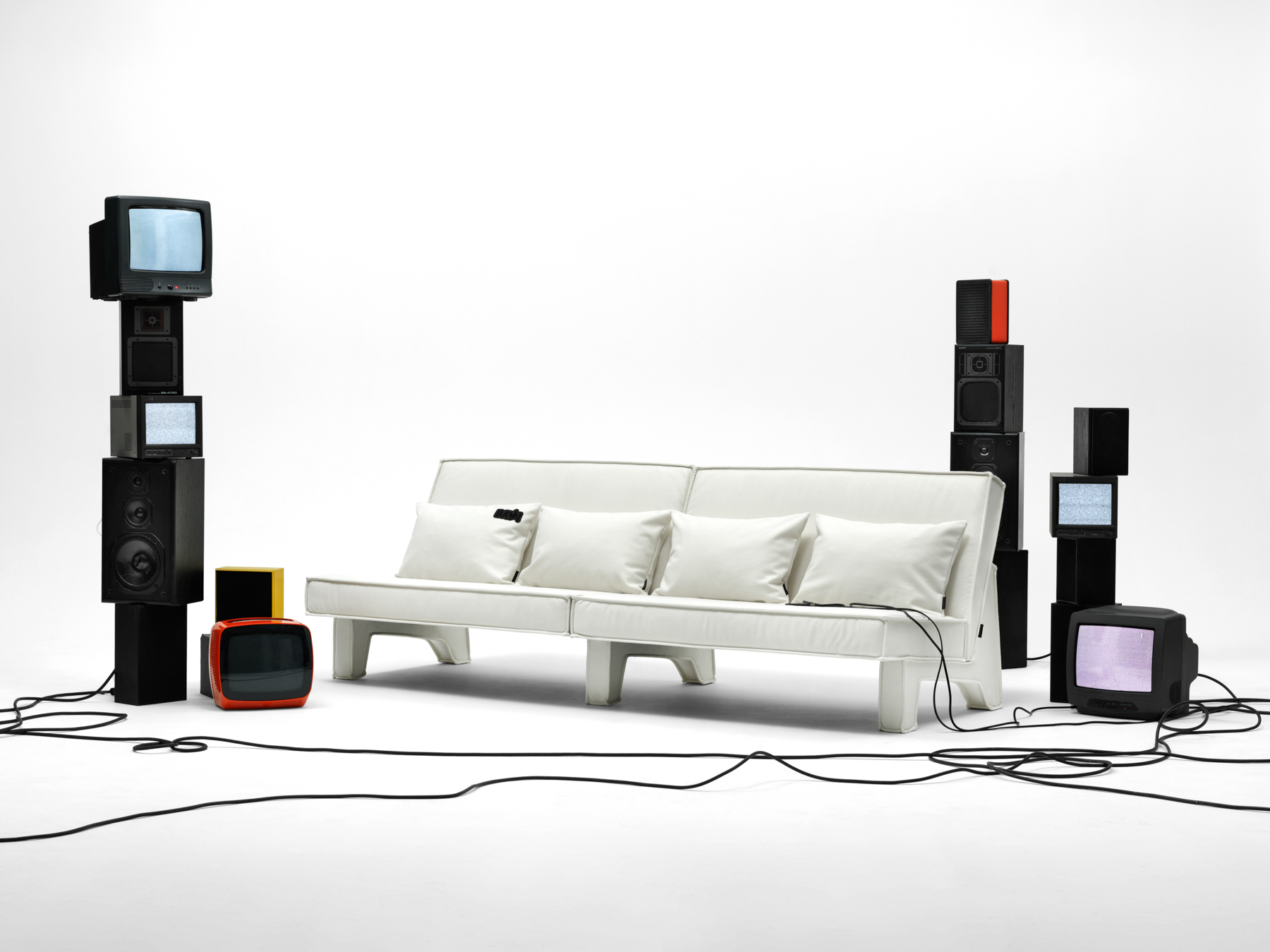 Swedish furniture design company Offecct is introducing a new acoustic panel as part of the Soundwave collection, this time in collaboration with Layla Mehdi Pour. The Italy-based product designer with origins in Iran holds a postgraduate degree in Eco-efficient product design and her creation is inspired by nature’s interplay between order and irregularity. The Jasmine Panel is shaped like a triangle and the panels can be combined in various ways. While acoustic panels might not be the first thing on everyone’s mind when thinking of design, collaborations like this reflect design’s potential to create healthy acoustic environments in public spaces. 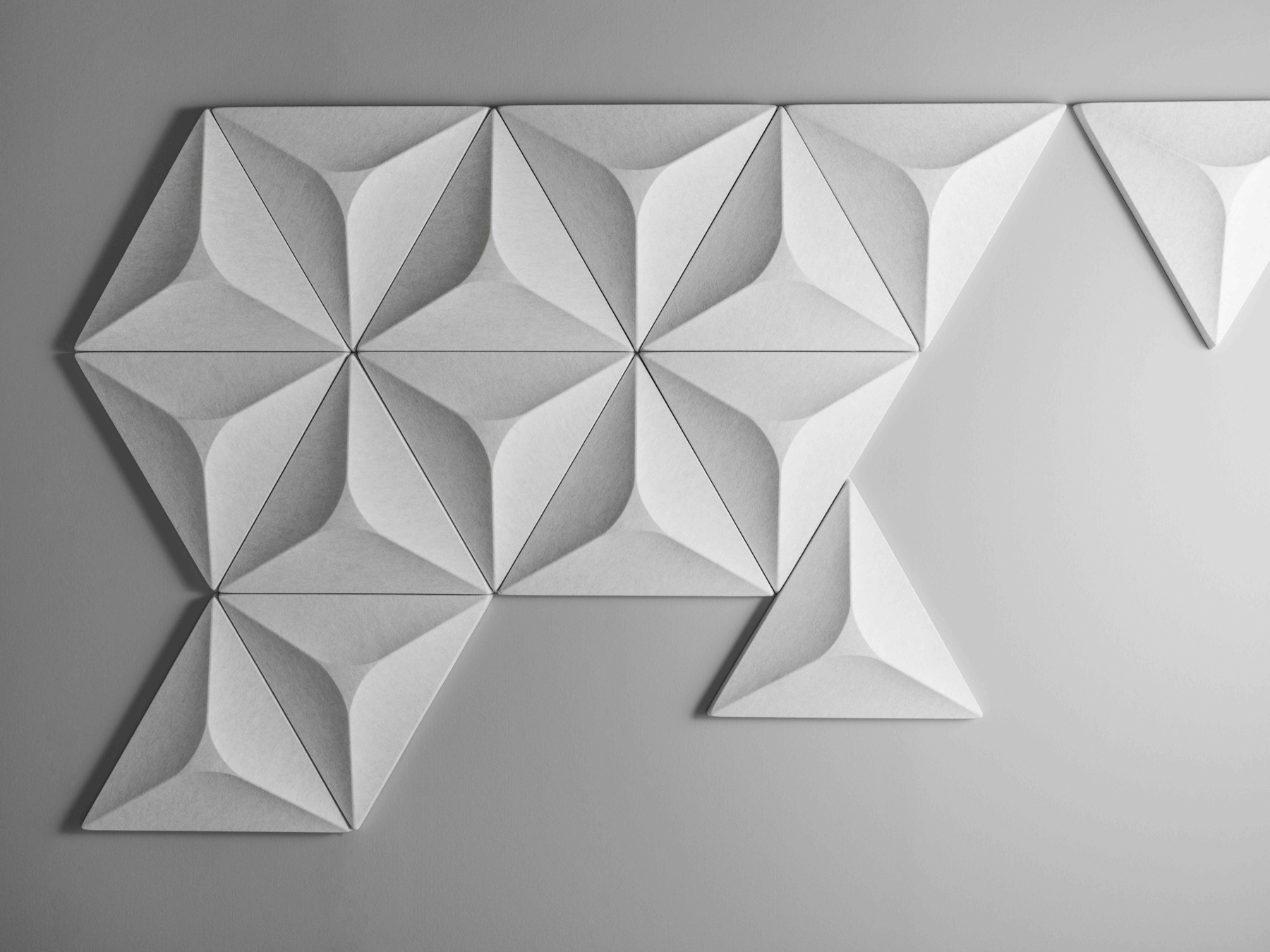 Originally designed in 1953 by Mathieu Matégot (1910–2001), the Satellite Wall Lamp is now being introduced by Gubi. Matégot had a background as a set designer giving him a special taste for the interplay of light and shadow and the Satellite Wall Lamp is an excellent example of this. Part of his Satellite collection, it has been named with a nod to the scientific progress in France at the time. The shades of the lamp are made from his own material innovation, Rigitulle, which allowed him to reinvent the traditional lampshade. For the Satellite Wall Lamp, two shades in ovoid forms have been mounted onto sculptural metal arms. The result is much more than a source of light; it doubles as an abstract sculpture when switched off.

Who doesn’t like a pretty basket to store blankets and other staying-in-essentials? Norm Architects has designed one for MENU and the result is, of course, gorgeous. The Ribbon Basket is a fusion of Japanese aesthetics and mid-century modern design, crafted from powder coated metal. Danish design agency Norm Architects and fellow Copenhagen brand MENU collaborate regularly; never change a winning team, isn’t that what people say?

Anyone who has ever rested their body on one of Hästens’ beds knows that the Swedish company takes sleep seriously. Together with cardiologist and mathematician Jussi Eerikainen, the brand is now launching Restore. The app makes use of music with high frequencies in order to relax the brain, aiming at increasing the quality of people’s sleep and, thus, their energy, creativity, and ability to concentrate. Simply download the app in the app store and drift away into peaceful sleep.