You can get pizza at almost any fast food restaurant in Copenhagen. If what you’re feeling like is a pile of grease, cheese and bread (and there is nothing wrong with that! Sounds like the perfect Saturday to me), there’s no need to drop more than 75 KR; just pick up a takeaway on literally any corner of the city. But if you’re looking for pizza that’s slightly more up-market and you want to sit down at an actual table with plates and cutlery, Copenhagen can seem like a limited place.

In the past few years, however, the city has begun to embrace gourmet pizza the way they do gourmet burgers. When you’re in the mood for a slightly fancier pie, here’s where to find the good stuff:

Surt states that it “collaborates with small lactic bacteria and yeasts” to make its sourdough pizza, which, alongside provided a mental image of bacteria in tiny chef hats tossing pizza dough, should paint a fairly accurate picture of what Surt is all about. Considering its location in Carlsberg Byen, which is a historical fermentation site in its own right, it’s hardy a surprise.

Surt also values small-scale farmers, its tight-knit and dedicated team, excellent flavors, and the tangy kick of an artfully fermented dough. Opened in 2019 by Giuseppe Oliva, Surt boasts Neopolitan-style bases with authentic Italian toppings, made with local produce and fired in a custom-built pizza oven.

With two locations in the city, both of which are by the water, delicious Neapolitan-style pizzas, and a menu full of authentic Italian classics like burrata and Aperol spritzes, there’s no better spot in Copenhagen to live La Dolce Vita. If you’re eating at a less desirable time of year, the restaurant’s simple decor and walls plastered in Italian pop-culture and stills from The Talented Mr Ripley will be enough to transport you to a rocky beach in Sicily.

Arguably, the worst thing about pizza is not being able to eat more than one in one sitting. Enter Pico, the tapas of the pizza world. Here you can choose three (or more, there’s no judgement) from a menu of micro pizzas, giving you a selection of flavors across their organic sourdough base. There’s a range on offer, including a classic capricciosa, a controversial Hawain, and a seasonal pie using the freshest produce available.

Babbo is an Italian-inspired eatery based in Frederiksberg. It’s a cozy spot that’s a favorite with locals and feels more like you’re at a friends for dinner than a restaurant.
Baby Babbo produces their own cheeses, ham, sausages and other delicious things in their own little kitchen. There’s so much on the menu to choose from and nothing will disappoint, but their pizza has already gained a reputation for being a jewel in Copenhagen’s pizza crown.

Run and owned by the hardest working man on Store Kongensgade who’ll always stop for a chat with his customers, Ayub. Madbaren Marmorkirken is a cozy basement spot opposite Frederik’s Church with a stunning view of the building itself. The pizzas hit the spot if you’re looking for comfort food, with a perfectly crisp based and rich, cheesy topping.

Highly acclaimmed, Baest is the brainchild of Relae and Manfred’s og Vin founder Christian Puglisi. All ingredients are local and organic, so there’s no reason to feel guilty about indulging in these heavenly pies. The crust, some of the best I’ve ever tasted, is soft and chewy with just a hint of crunch. No reservations past 8:30: go early, go often.

Known for their sourdough, brick-oven baked crusts and simple but high-quality toppings, Mother has fast become a darling of the Copenhagen pizza scene. Located in Kødbyen, it’s a great place to go on your way to a bigger night out. You can’t make a reservation later than 8:30 pm, so get there early on or be prepared to wait at the bar. Their weekend brunch, which also includes pizza, is worth checking out as well.

If you’re not into thin-crust pizza, Gorm’s may not be for you. But if you are, their crunchy base is on point. With two locations – one restaurant and one booth in Torvehallerne – Gorm’s is a great place for a light dinner or quick lunch. Expert tip: if you get a takeaway at the restaurant, you pay a lot less! If there’s anything better than pizza, it’s eating pizza on a glorious rooftop terrace that overlooks the centre of Copenhagen. The pizzas are expertly-made with a soft, chewy, heavenly crust. The cheese is creamy on a different level than any other pizza I’ve tried in Copenhagen. Oh, and do yourself a favour: try the Aperol Spritz.

With very few seats, La Fiorita is mostly for takeaways. This old-fashioned Italian pizza house serves up the real thing; no crazy baking methods, ingredients or claims of being “modern.” Just delicious pizza and a good price. 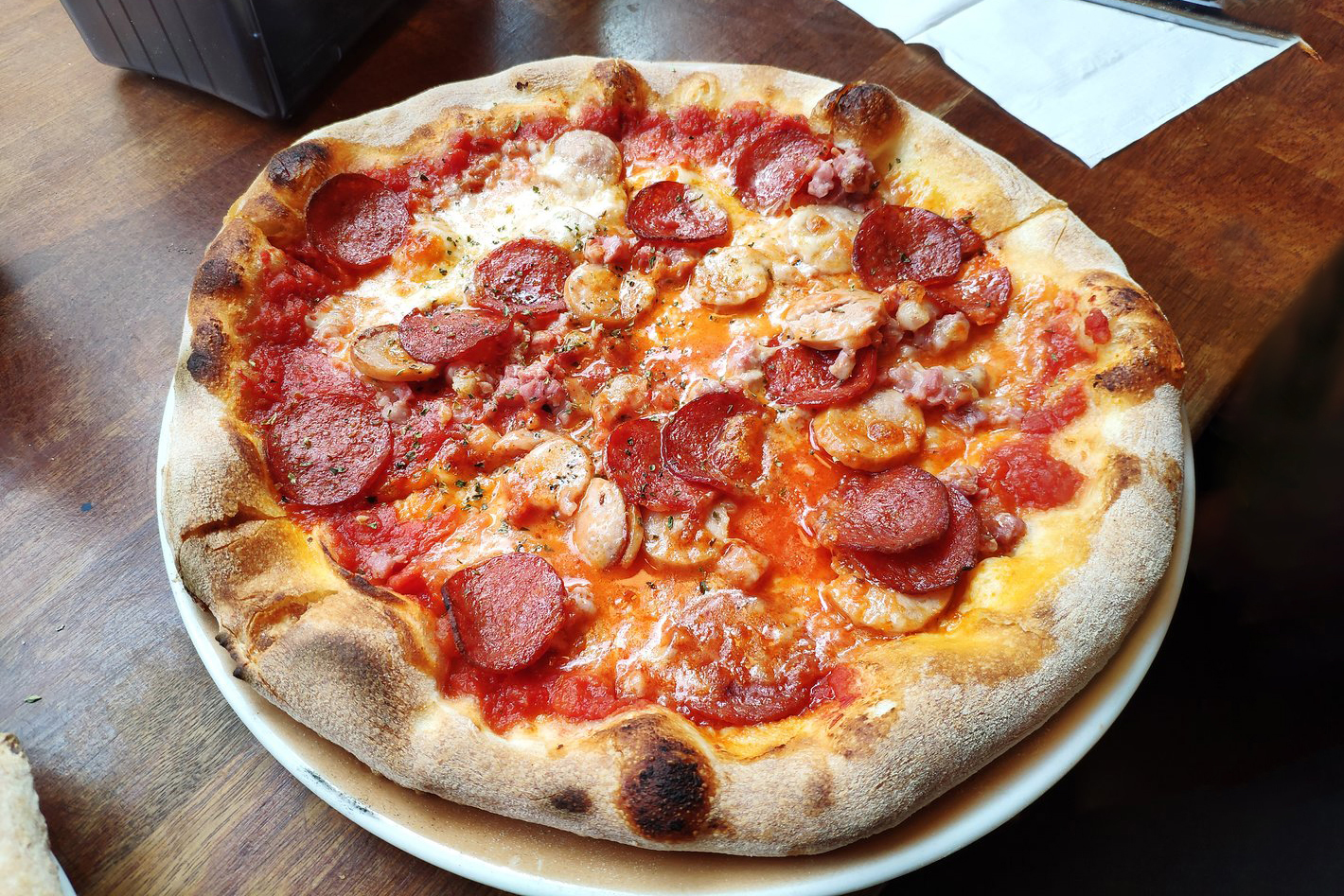 Thin crust doesn’t have to mean less pizza. These massive super-thin crust pizzas have an array of mouth-watering and unexpected toppings. The community-style rustic seating means that this truly does feel like a neighborhood joint. The cocktails are also excellent, so don’t miss out on trying one (or three) while you’re there!

Did we miss your favorite pizza place in Copenhagen? Tell us about it in the comments!