It’s over; everyone go home. Oh god, wouldn’t it be great if they played “Closing Time” over the speakers while shutting the place down? I would love that. Finally, some quality music at Roskilde Festival.

Although I am now fully ready to get some sleep and not have to brush dirt out of my hair, it’s always sad when a festival finishes. If you’re there until the very end, as we were last night, you look out over the detritus of the last week and feel as though you’ve witnessed the end of civilisation. And boy did it go out with a bang.

The day started gently enough; my family-in-law has a tradition of meeting for brunch at BusBus on the last day of the festival. We piled out plates with eggs and pancakes to fuel up. Still on a high from Mew from the night (read: morning) before, we were in a great mood as we finished the Day 3 dispatch in the media centre and headed out to the first shows of the day.

Freya went to see Swedish singer Seinabo Sey at Apollo stage. “She has an amazing voice and her songs are incredibly soulful,” Freya says, adding, “the crowd really knew her songs – they were singing along with every word. It was moving, and she was so moved as well.” 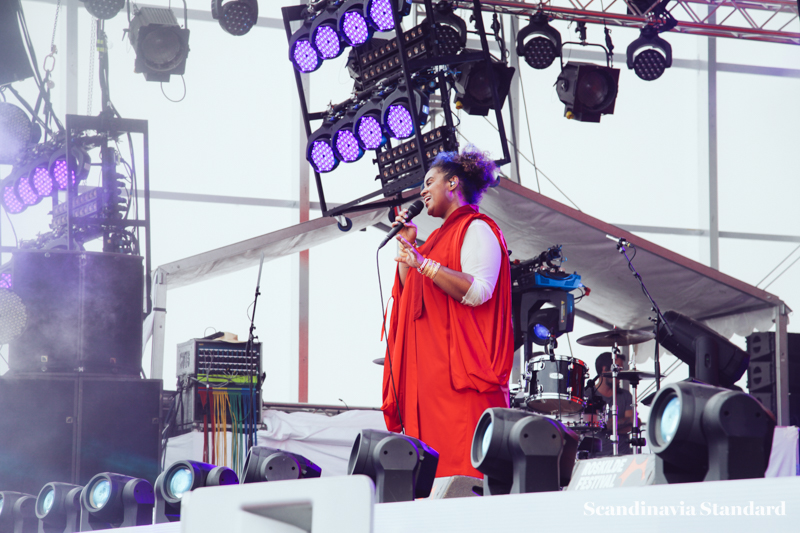 We met up again at WhoMadeWho at Arena. This is a fun, local band. They started off slow but the show picked up quickly, with the three piece band revealing an entire ensemble behind a curtain halfway through. It was an energetic performance and the crowd responded in-kind. 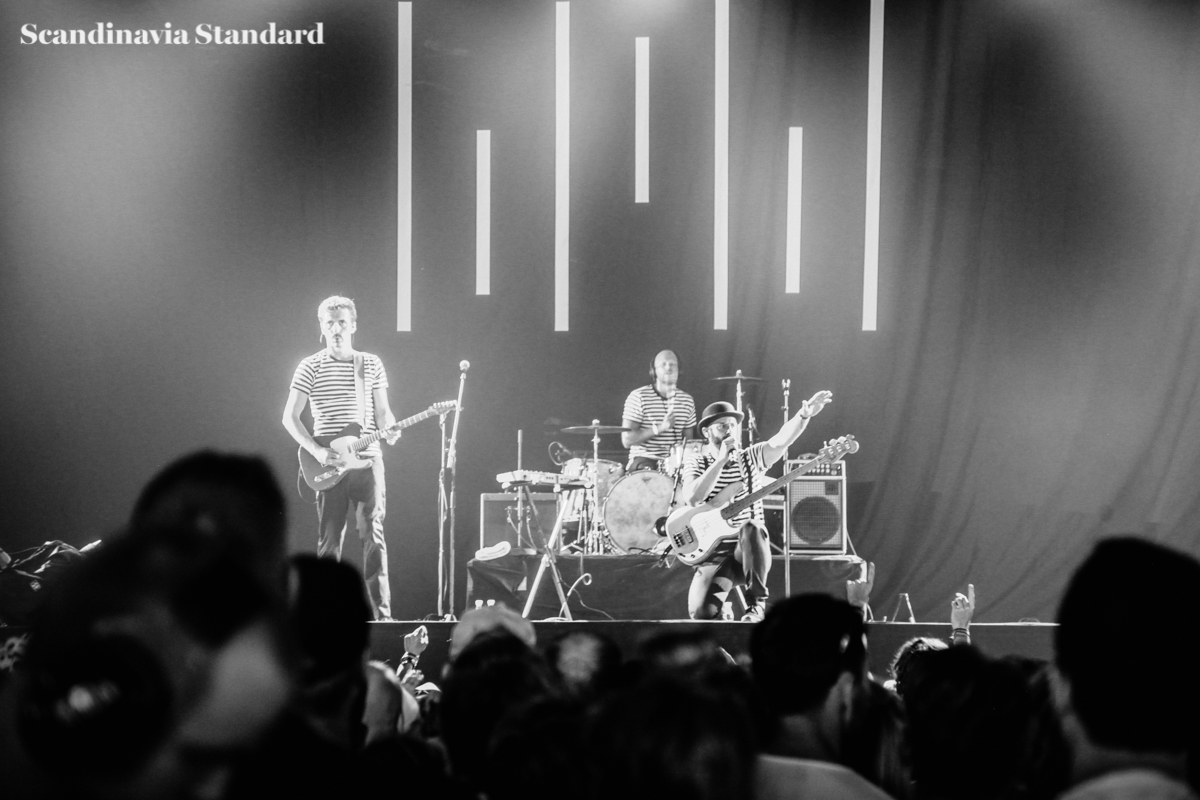 Freya left early from WhoMadeWho, heading over the Barrington Levy at Orange stage. “He had a tough audience at first,” she says, “Orange is such a big area and there weren’t that many people there. Then they had some technical difficulties too. Levy began singing the words ‘technical difficulties.’ He’s really a pro. As the show went on, more and more people showed up and by the end he had converted the entire Orange stage area. It was pretty fantastic to see.” 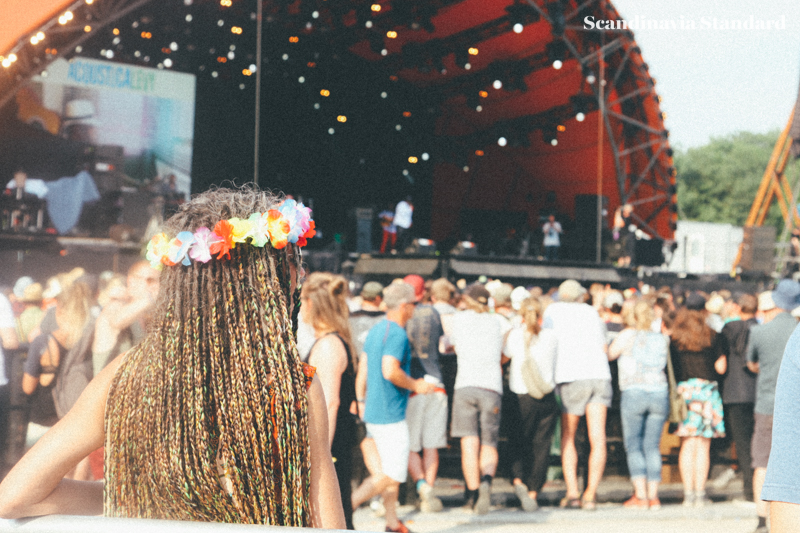 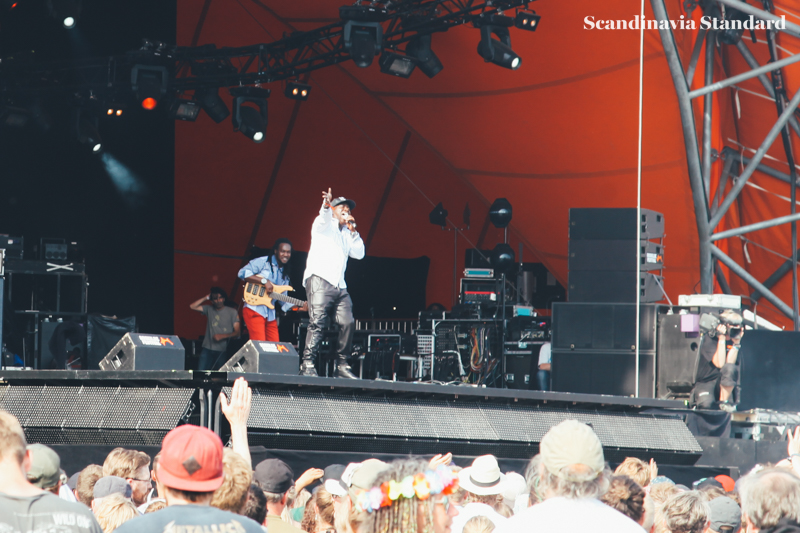 Freya, fellow writer Sheila and I had some time to kill between Levy and Nicki Minaj, so we got some bananas (thank you, Tom Spray!) and found a patch of grass in the Media City area. We lay down and soon found ourselves debating whether or not to get up ever again. “We should really go to Nicki Minaj,” one of us would say, “Yes but also, we could not!” another would point out. It was point-counter point for awhile there. We were just so tired and could not get our shit together. But in the end, sense prevailed. If Nicki Minaj was going to get up on that stage and perform for us, the least we could do was go dance. 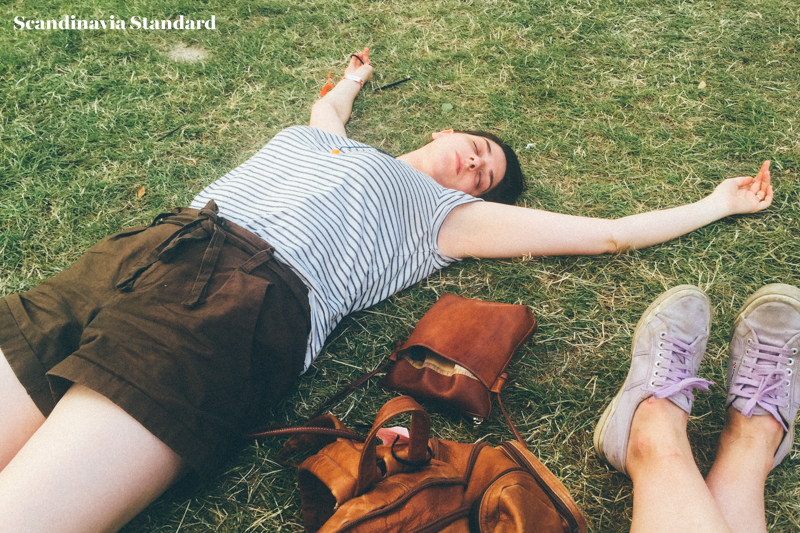 While none of us would count ourselves as huge Nicki Minaj fans, we know her tunes and can definitely get down to them. I thought the show was fine – we bopped around and generally enjoyed ourselves. Yes, she was singing over a track but rapping for real. I did appreciate when, between songs, she urged all the women in the audience to “stay independent. You should never depend on a man for anything!” Though heteronormatively phrased, I certainly agree with the essential sentiment. And coming from a woman who obviously lives by her own advice, very refreshing. Protect yourselves, ladies. 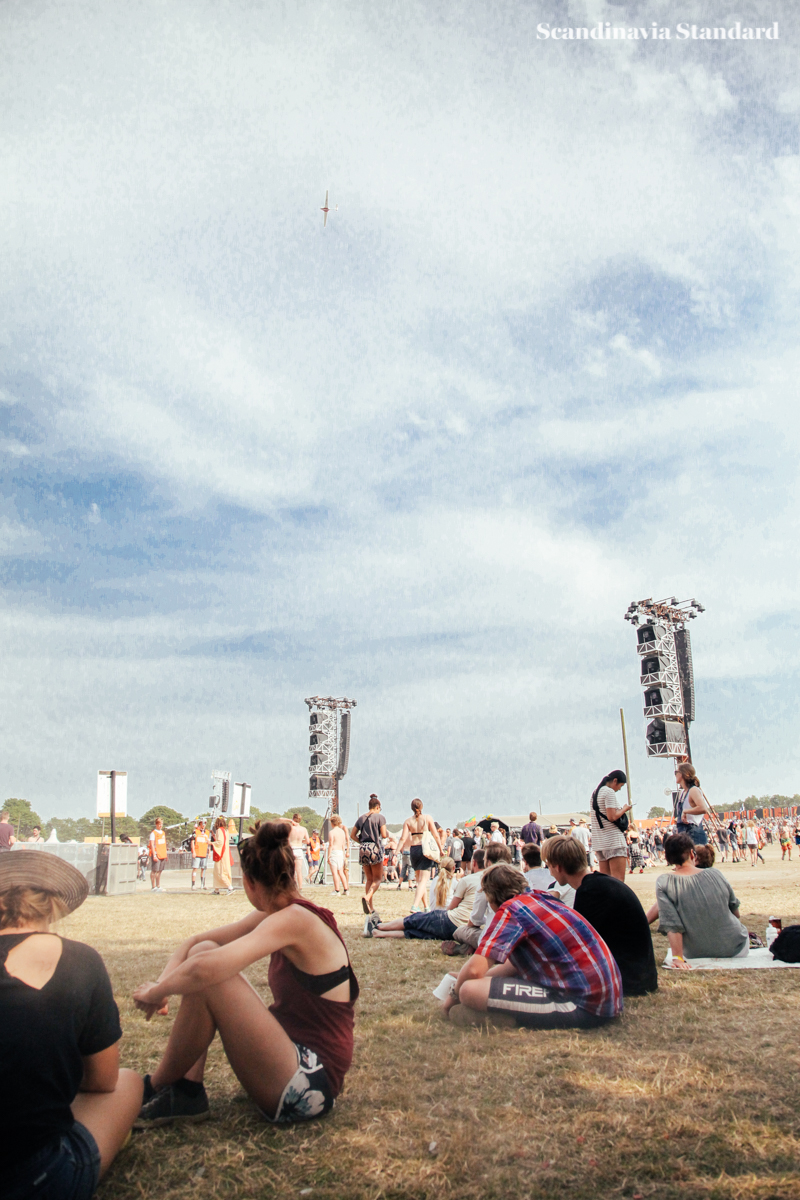 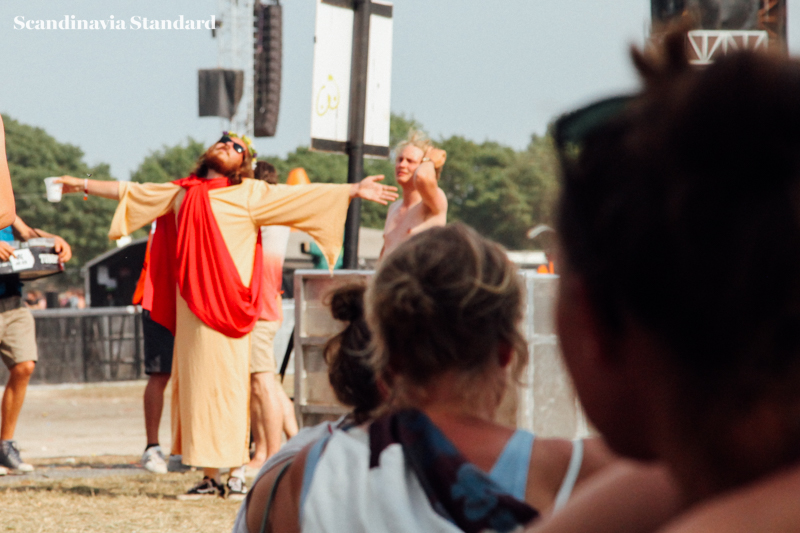 Sheila and I made our way to the tail-end of Nils Frahm while Freya got in line for Paul McCartney. Though we didn’t get to see much, Frahm is massively talented and it was a joy to watch.

Next was the man himself: Sir Paul McCartney. I was of two minds about seeing him. The Beatles are…The Beatles. But they don’t exist anymore, so would watching McCartney play be like watching him do covers of himself? I decided to give myself over to the experience.

I know a lot of people had problems with the sound and, as I’ve continually said, Orange stage is hit or miss. I was lucky to be in a spot where I could hear perfectly and I just wish everyone else could have had the same experience, because it brought Freya and me to tears more than once. 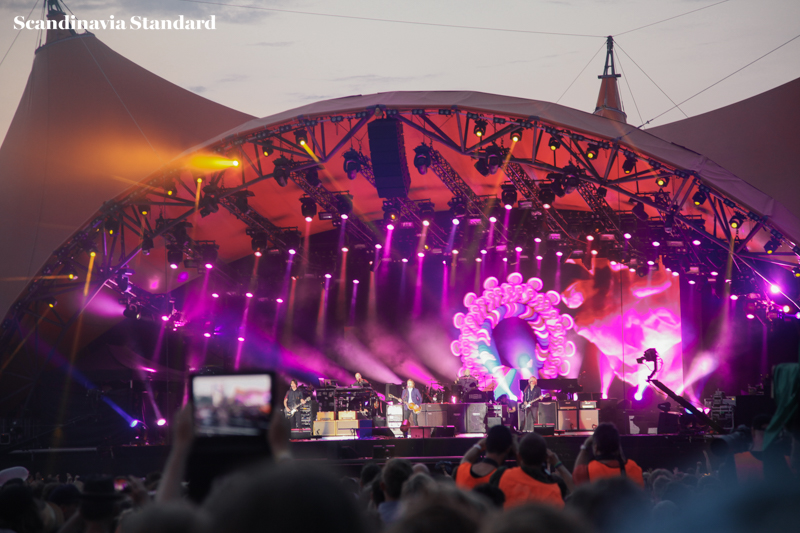 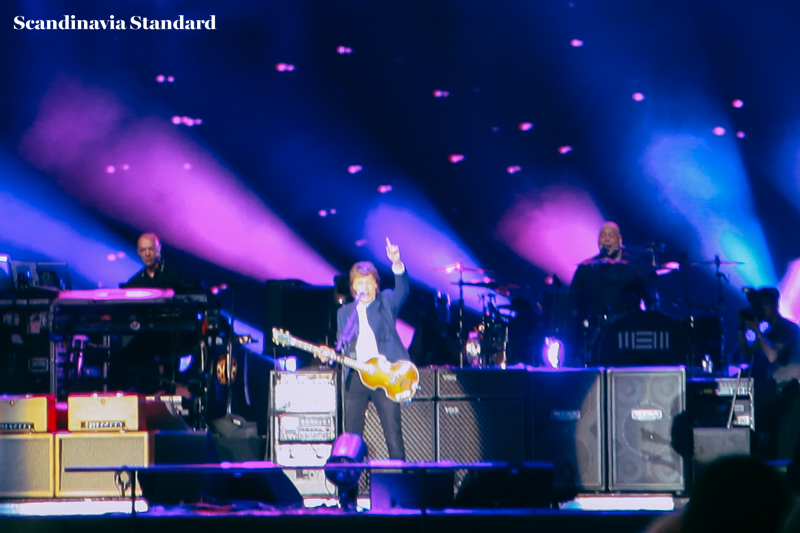 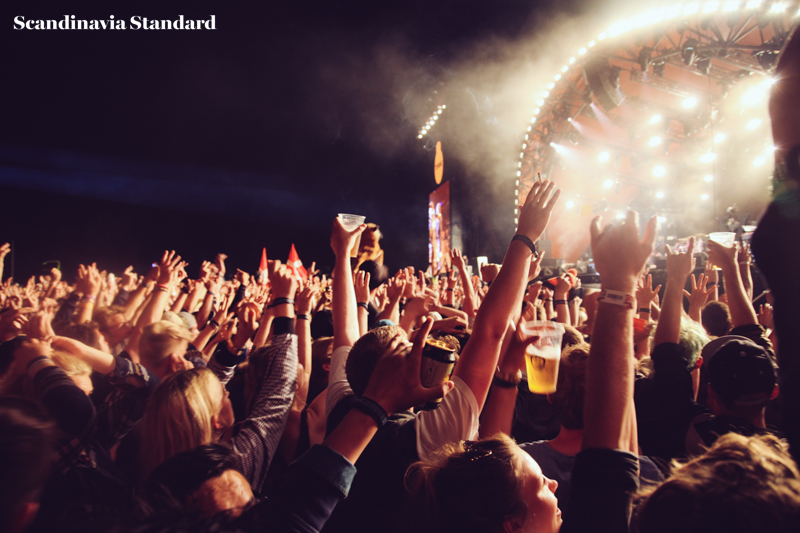 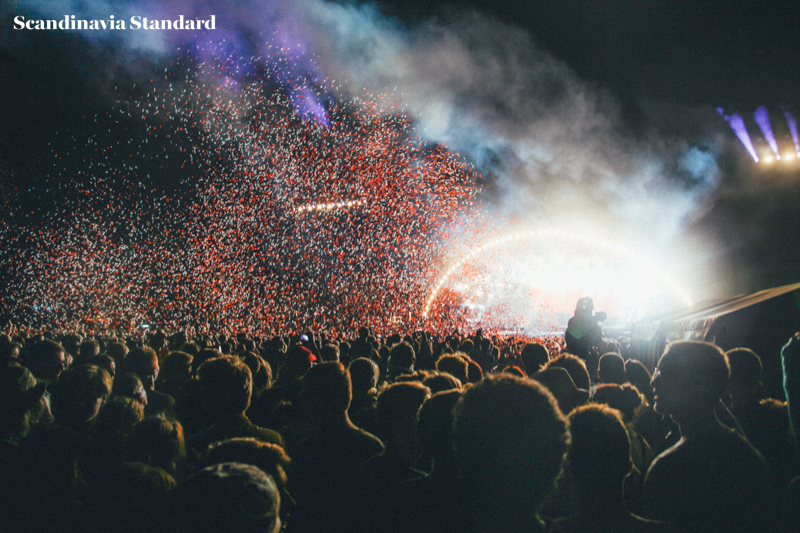 McCartney played for over two hours so the transition to the next show was quick. Suspekt was also at Orange stage and the line to get into the first pit area was long. We managed to do it, which I almost immediately regretted because people came to mosh and I had a fancy camera in my hands. I don’t know much about Suspekt, a Danish rap duo, but they have certainly captured the young and cool Danish contingent. I felt old.

The reason I went in the first place was to see our friend Nicklas Kunz’s sneak peek of the new season, being released on stage. This really isn’t my music but the clothes looked great! We only had 30 minutes from the start before having to leave for Jamie xx and they started 15 minutes behind time, so it was a brief interlude more than a full concert experience. 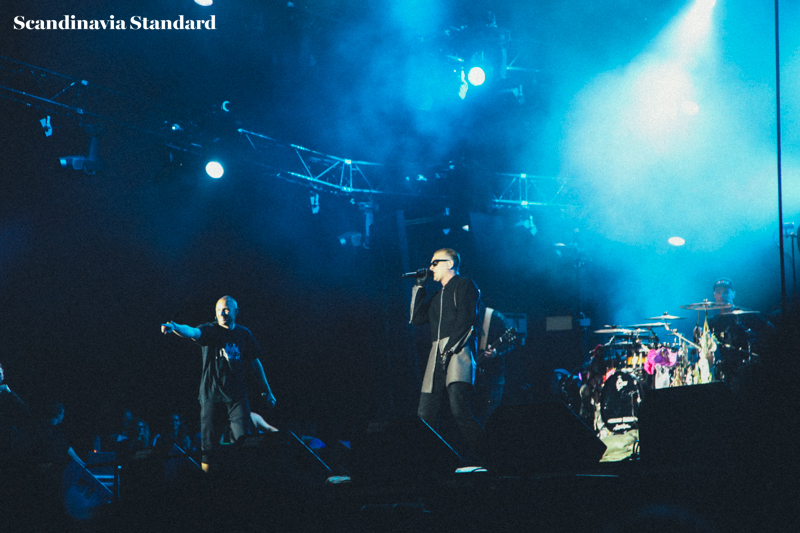 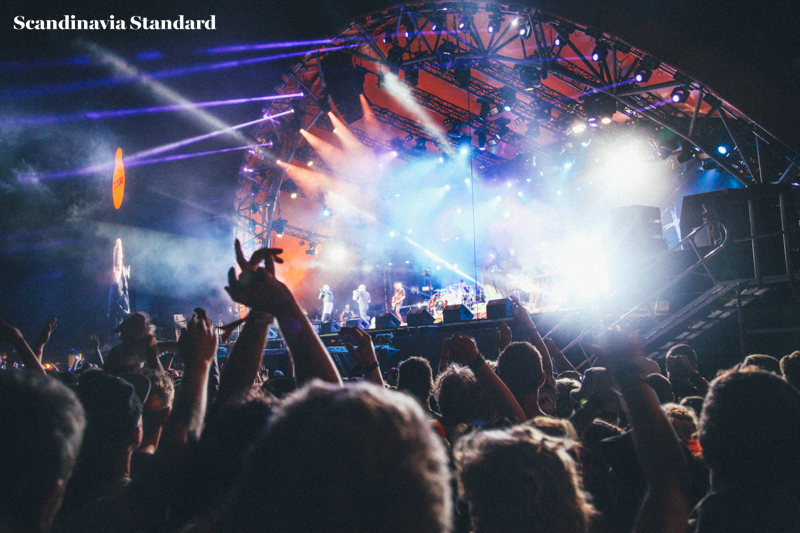 Finally, it was time: Jamie xx. This was one of my top shows to see and I rushed over from Suspekt excited to dance. The Roskilde Festival gods had other plans, however, and just meters from Apollo stage I stepped on an intact vodka bottle that someone (an idiot, probably!) had left in the middle of the path. My foot rolled upwards and that was that; sprained ankle. We stuck around for half an hour but I was in so much pain that we had to leave. Sheila took some great shots in the meanwhile: 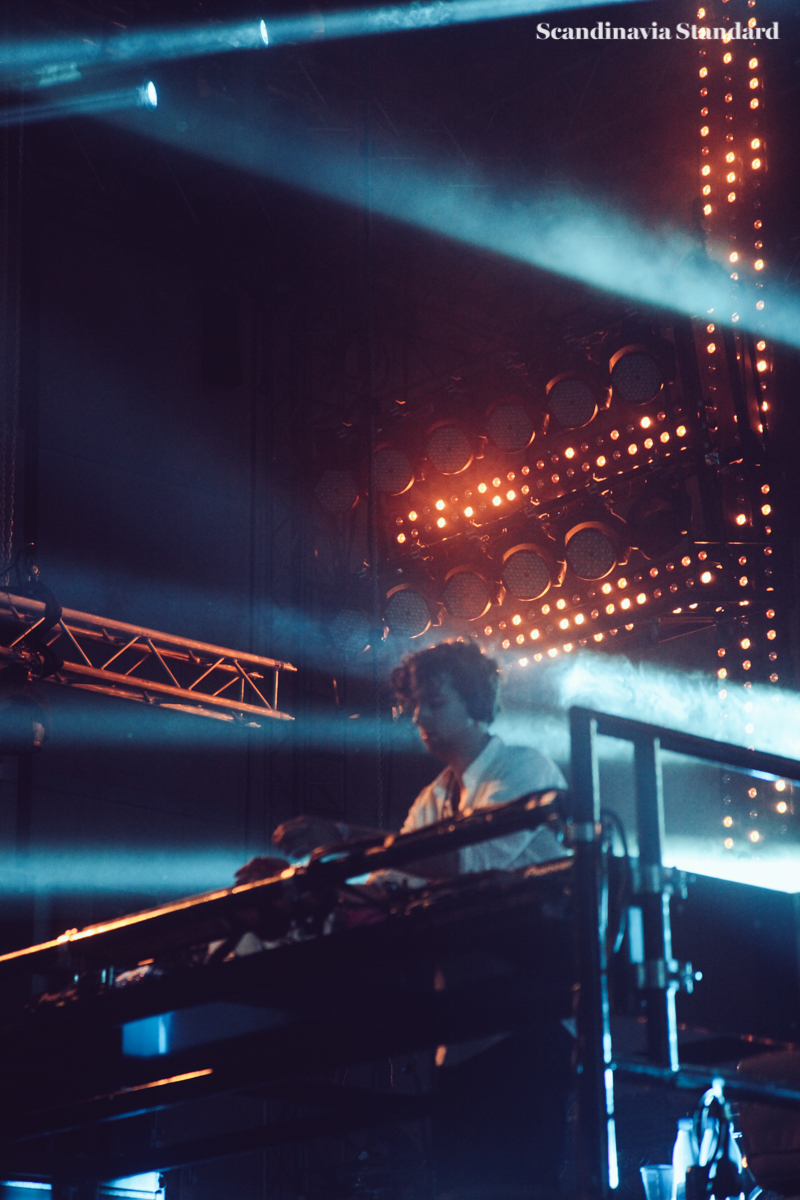 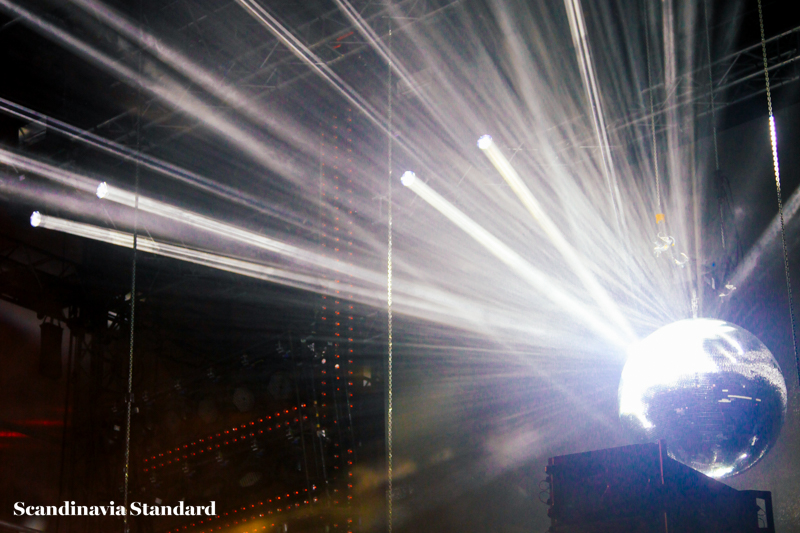 Roskilde has a taxi service but the wait was over an hour, so my husband, Freya and I walked home (we stayed at my in-laws in Roskilde – tusind tak, Lis og Mikael!). What could have been an absolutely miserable end to the night ended up being one of the most fun times I’ve had all festival. We traded gross festival stories. Freya’s was the best:

She had been enjoying herself at Paul McCartney and found herself in a deserted patch under a speaker. Freya began dancing on the waterlogged grass. When she looked to her right and saw a woman squatting on the ground with her pants down, Freya realised that the waterlogged grass was actually filled with urine, and she’d been splashing around in pee. Because there is no other way to react to this situation, she began laughing hysterically. The image of Freya frolicking in a swamp of piss and then laughing maniacally to herself is the best possible way to describe the entire festival experience.

Lesson learned about festivals: they can supply you with the platform and the pee, but it’s having friends who will dance in the pee that makes it all worth it.

Or sometimes, there is no lesson.

Catch up on what you missed with dispatches from Day 1, Day 2 and Day 3. 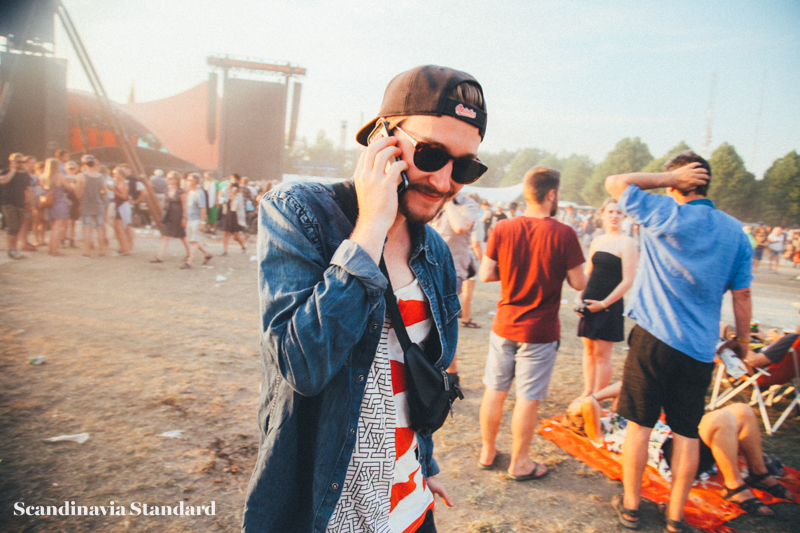 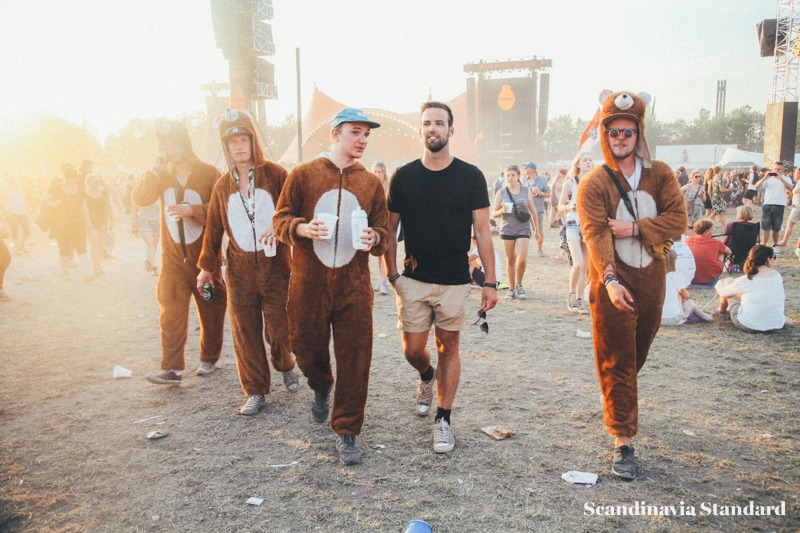 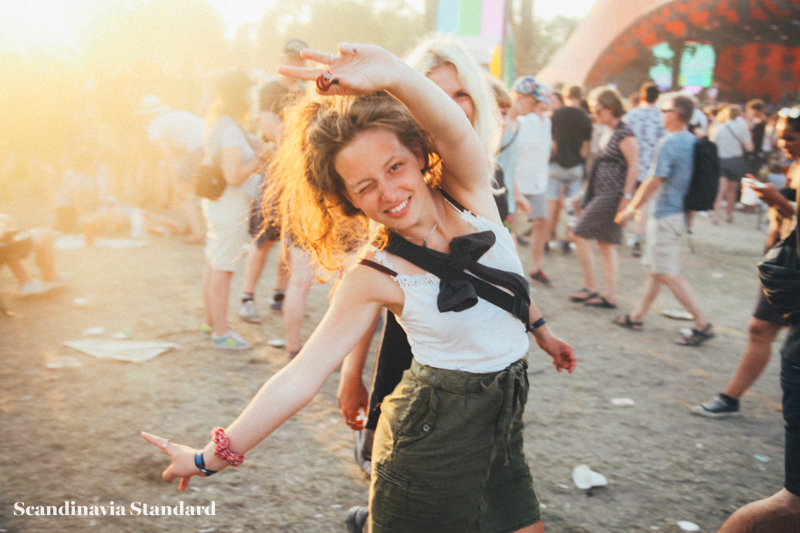 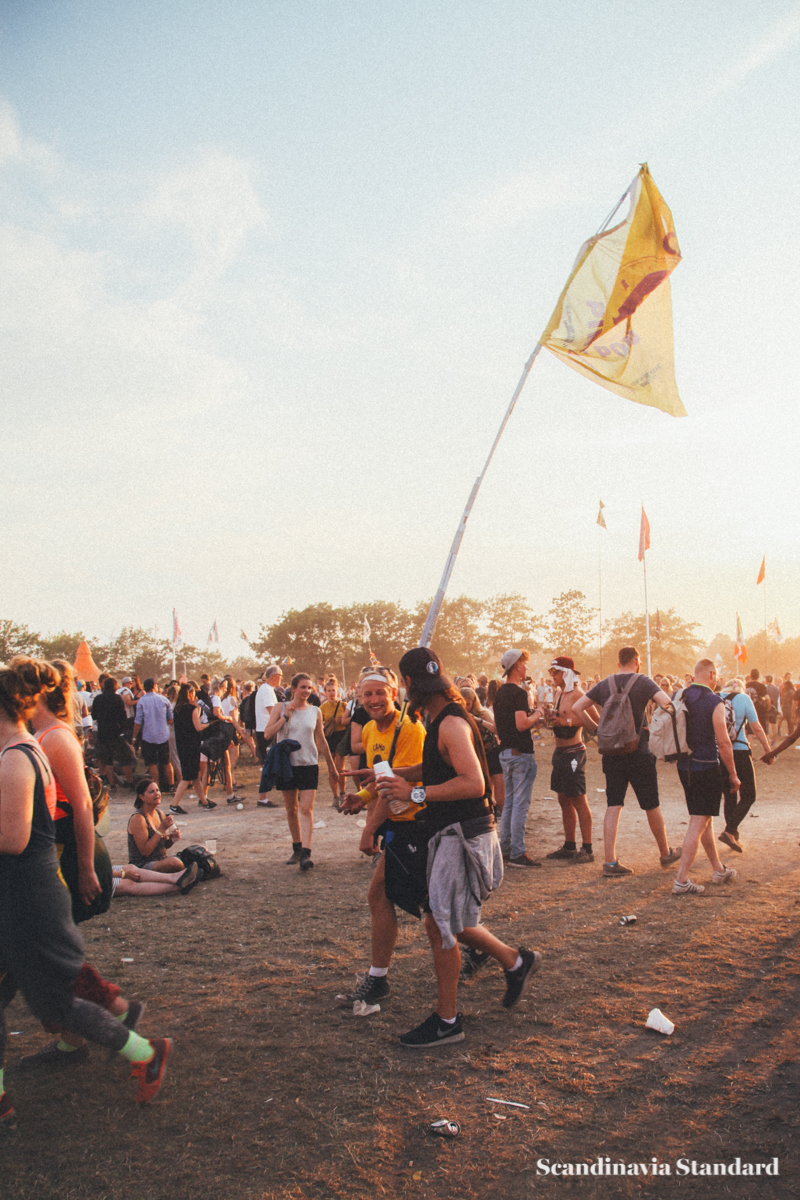 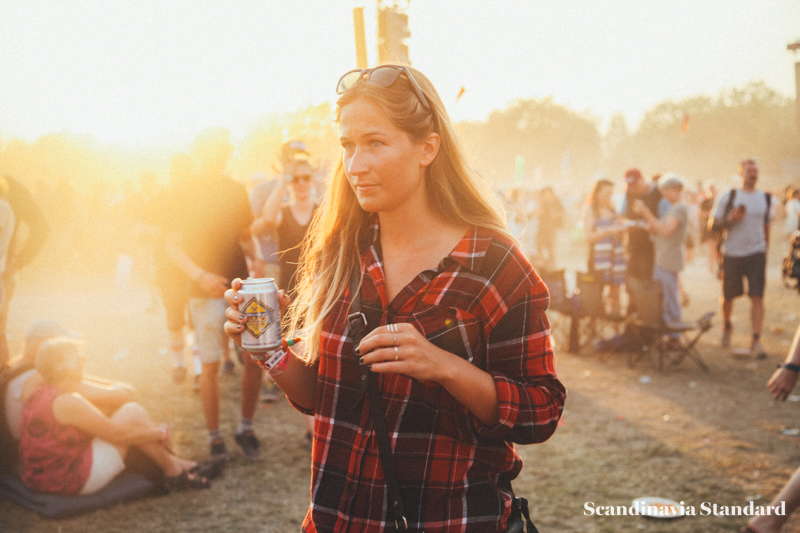 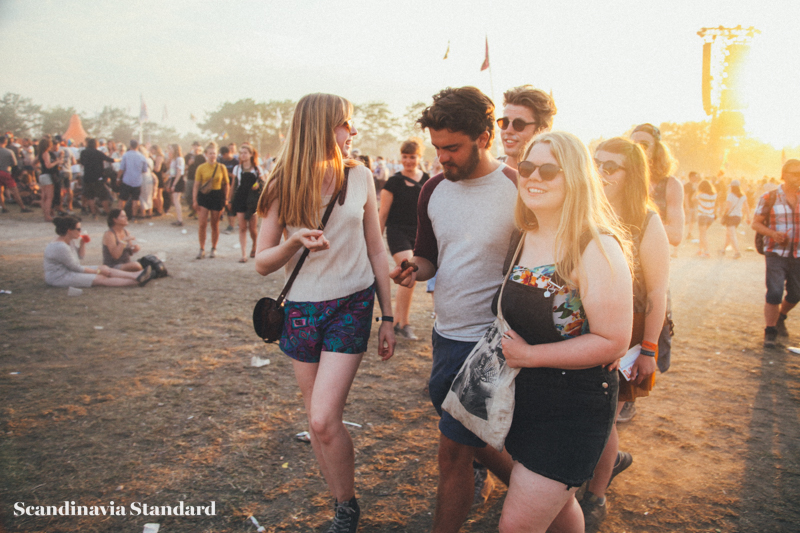 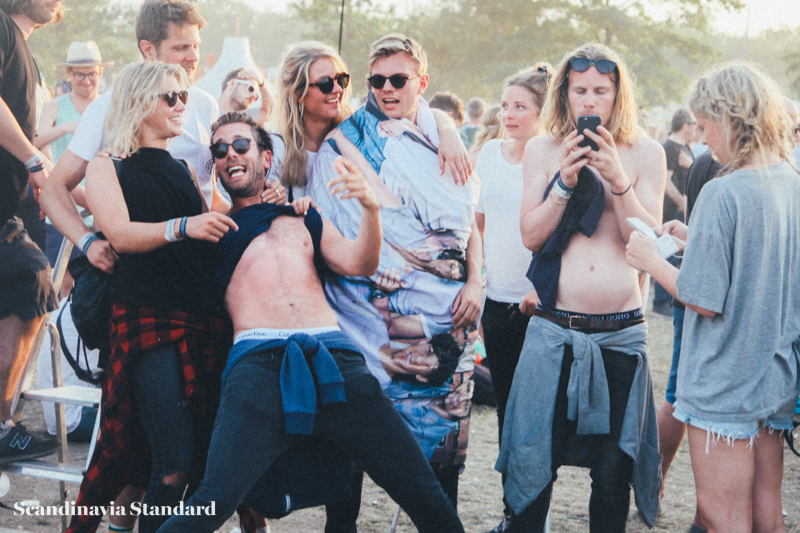 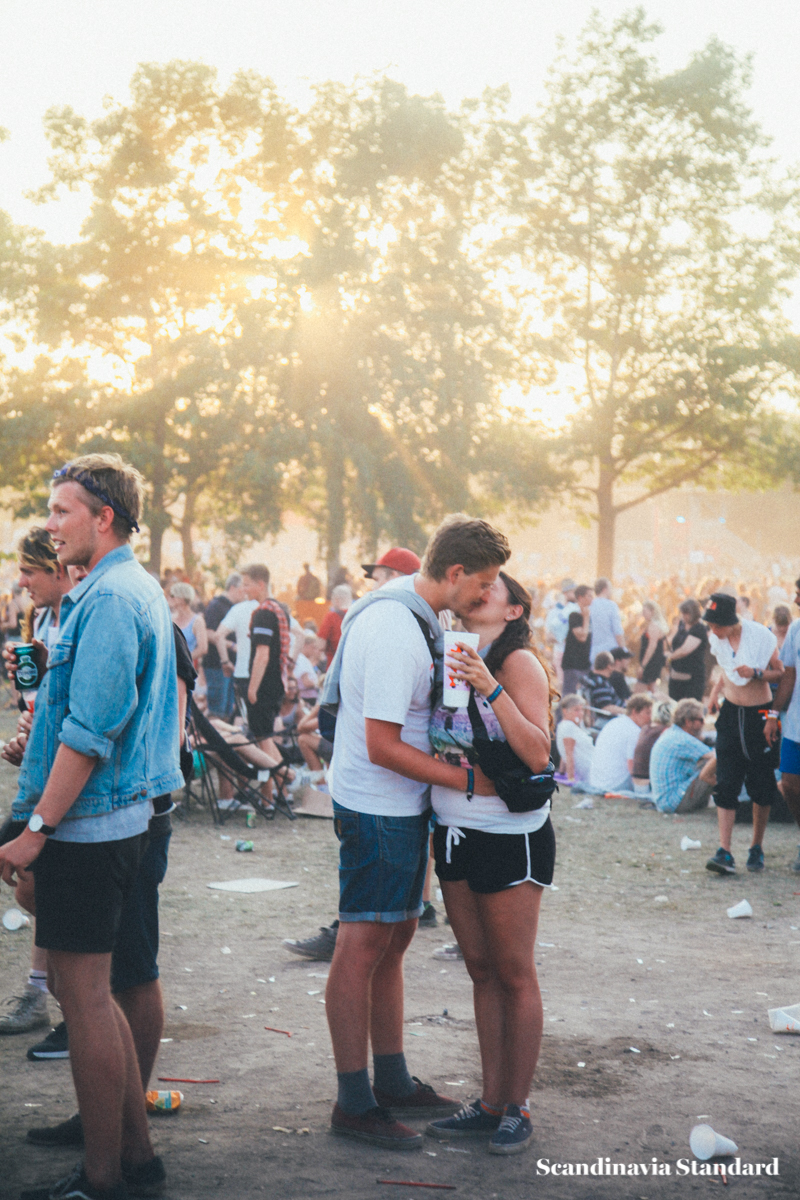 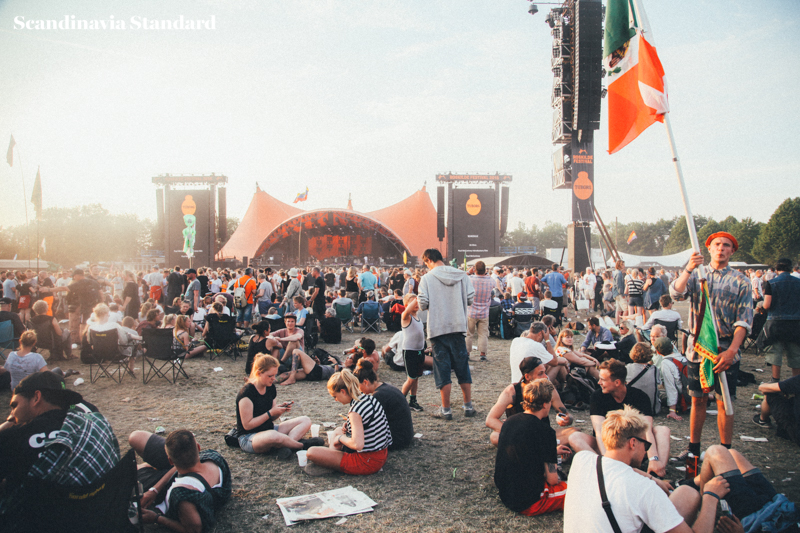 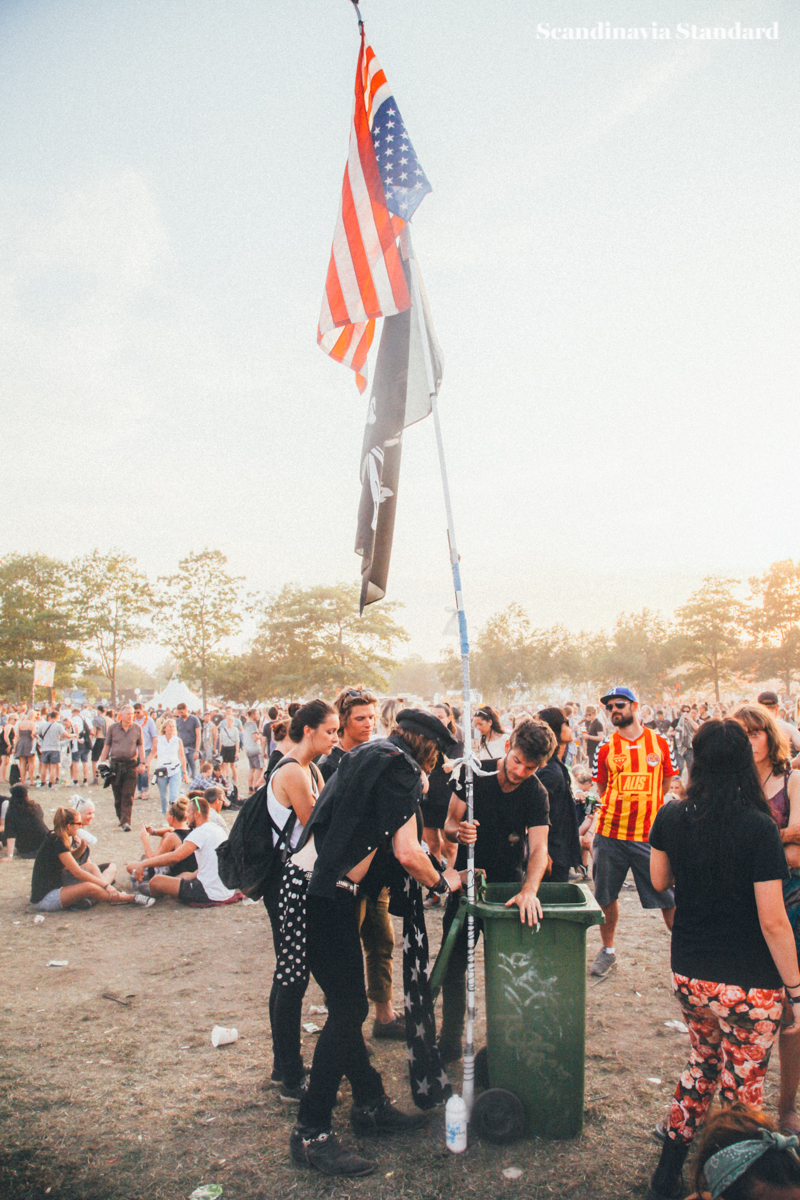 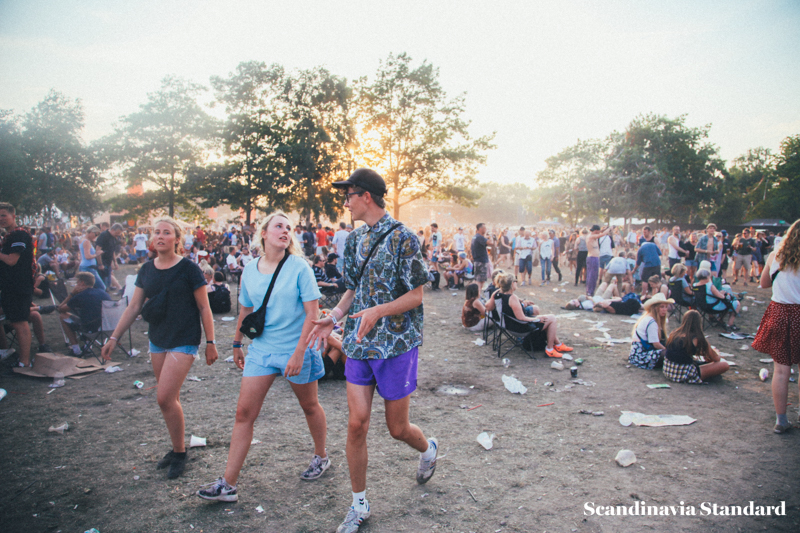 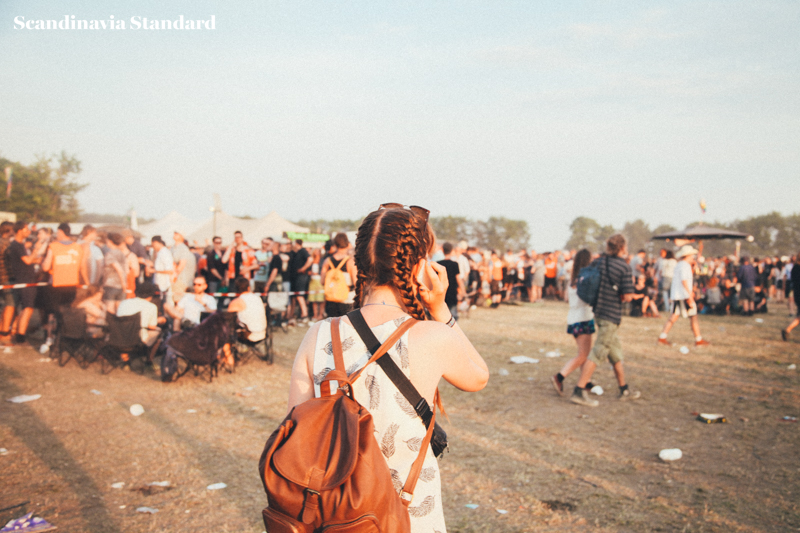 The party never has to end thanks to our Roskilde Playlist.