Danes love to celebrate with something sweet to eat, and the country’s reigning queen of cakes is the Dansk lagkage (Danish layer cake). Devilishly good, and with so many options to choose from, a dansk lagkage is, in its simplest form, a floury cake with fresh cream and fruit.

They’re baked for birthdays, anniversaries, family gatherings and sometimes, just because. So, get those forks ready. We’re tucking into the world of this Scandinavian cake.

So let’s dive into the sweet layers and find out everything you need to know about Danish layer cake:

What is a Danish layer cake (Dansk lagkage)?

A lagkage is cake with layers – ergo the name, lag (layer) –kage (cake) – and encompasses a number of Danish desserts that came into fashion in the early 1900s.

Traditionally, lagkager consist of two to three round, sponge-like cakes with layers of fresh berries and lots (and lots) of whipped cream. Lagkager can also have kagecreme (cake cream) for a filling instead of whipped cream. Kagecreme is stiffened egg yolks sweetened with sugar and vanilla, and has a thicker consistency than whipped cream; it is similar to a custard or pudding.

The cake layers themselves are usually pretty straightforward: just some flour, sugar, a few eggs, and a scoop of leavening agent. The trick is to make them not too thick, an understated difference that sets lagkager apart from other, more traditional layered cakes.

Of course, modern interpretations of the Danish classic have gotten deliciously ostentatious with towering layers, sorbet fillings, and birthday-themed shapes.

What are the types of Danish layer cakes?

Name any seasonal fruit, or sweet ingredient, and you’ll probably find a recipe for an oh-that-looks-so-good-can’t-wait-to-dig-in lagkage for it.

The berry-based versions are among the most popular, as is the Othellokage, named after Shakespeare’s protagonist. The Othellokage is quite the confection, with macaroons, chocolate icing, marzipan, and buttercream roses in addition to the alternating layers of cake and whipped cream. Sugar rush? Definitely!

When do Danes eat layer cake?

At any celebration! Lagkage is most popular for birthdays and major events such as graduations, confirmations, and anniversaries. But if there’s something to celebrate, Danes will surely have a layer cake at the ready! 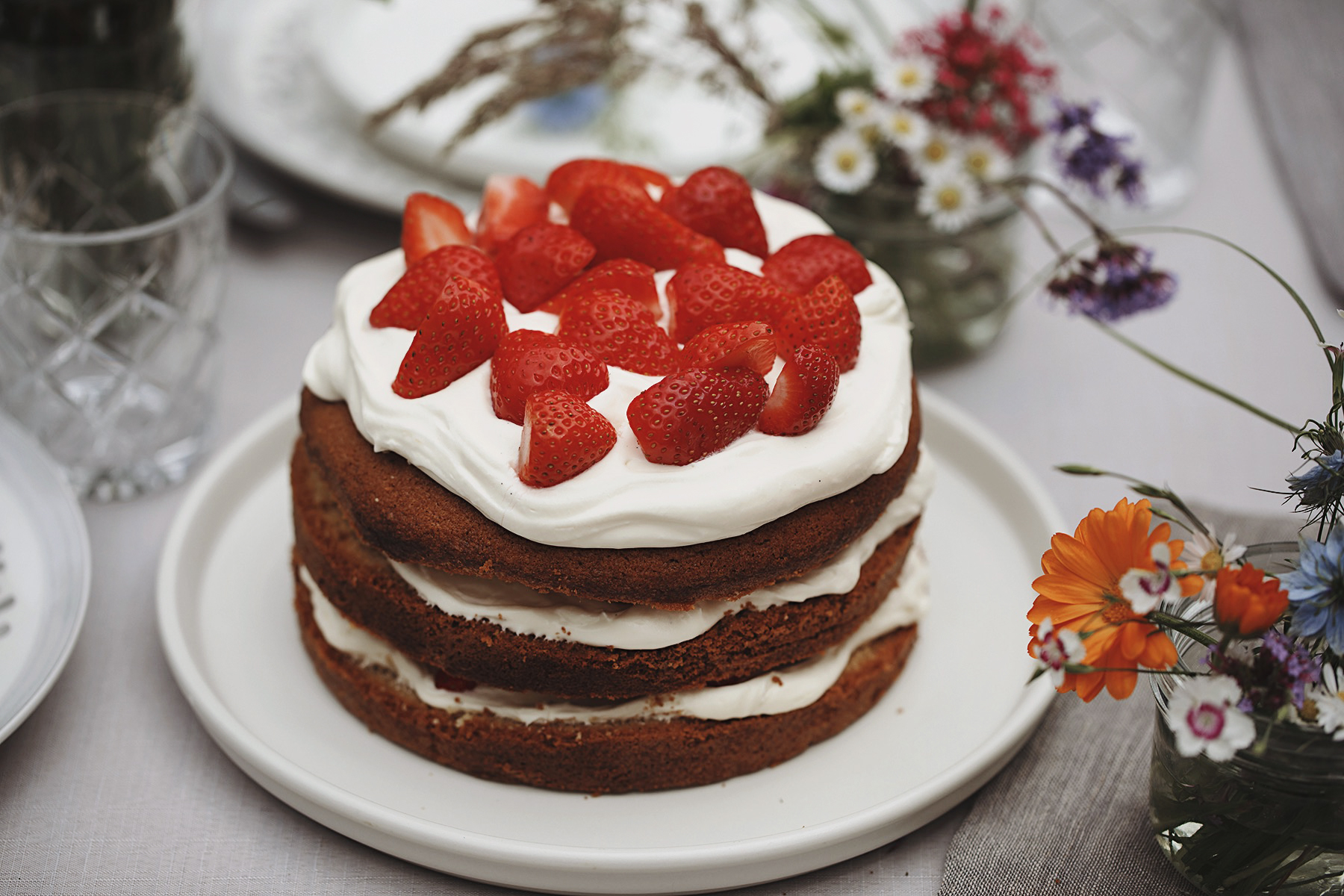 To make your own sponge:

To make one 3-tier layer cake:

1. Preheat the oven to 180ºC. Oil and line the base and sides of a bread pan or square cake tin with baking parchment.

2. Beat the whole egg well. Gradually add the sugar and whisk until the dough is foamy and light.

3. Add the water. Sift the baking powder and the two kinds of flour together and then gently turn them into the dough.

4. The dough is baked in three trays on baking paper or in cookie molds. Baking time approx. 10 minutes at 225ºC. Set the cakes on a rack allowing them to cool briefly.

Whisk eggs and cornstarch together in a saucepan. Split the vanilla bean and scrape out the seeds. Add vanilla bean + seeds, milk and cane sugar to the saucepan. Boil and stir for 1 minute. Once the cream has thickened, take it off the heat. Set it to cool. Whip the cream to whipped cream and turn it gently into the cold vanilla cream.

250 g strawberry
250 g blueberry
125 g raspberry
Other options include blackberries, figs and any of your favorite decorative fruits!

Garnish the cake generously with strawberries, blueberries and raspberries.

Danish layer cake is not the same thing as Kagemand, also known as “cake man.” Kagemand is a person-shaped cake that is typically made on children’s birthdays. It is covered in glacé icing and loads of candy. It’s a goofy, beloved cake that most Danish children find delightful. 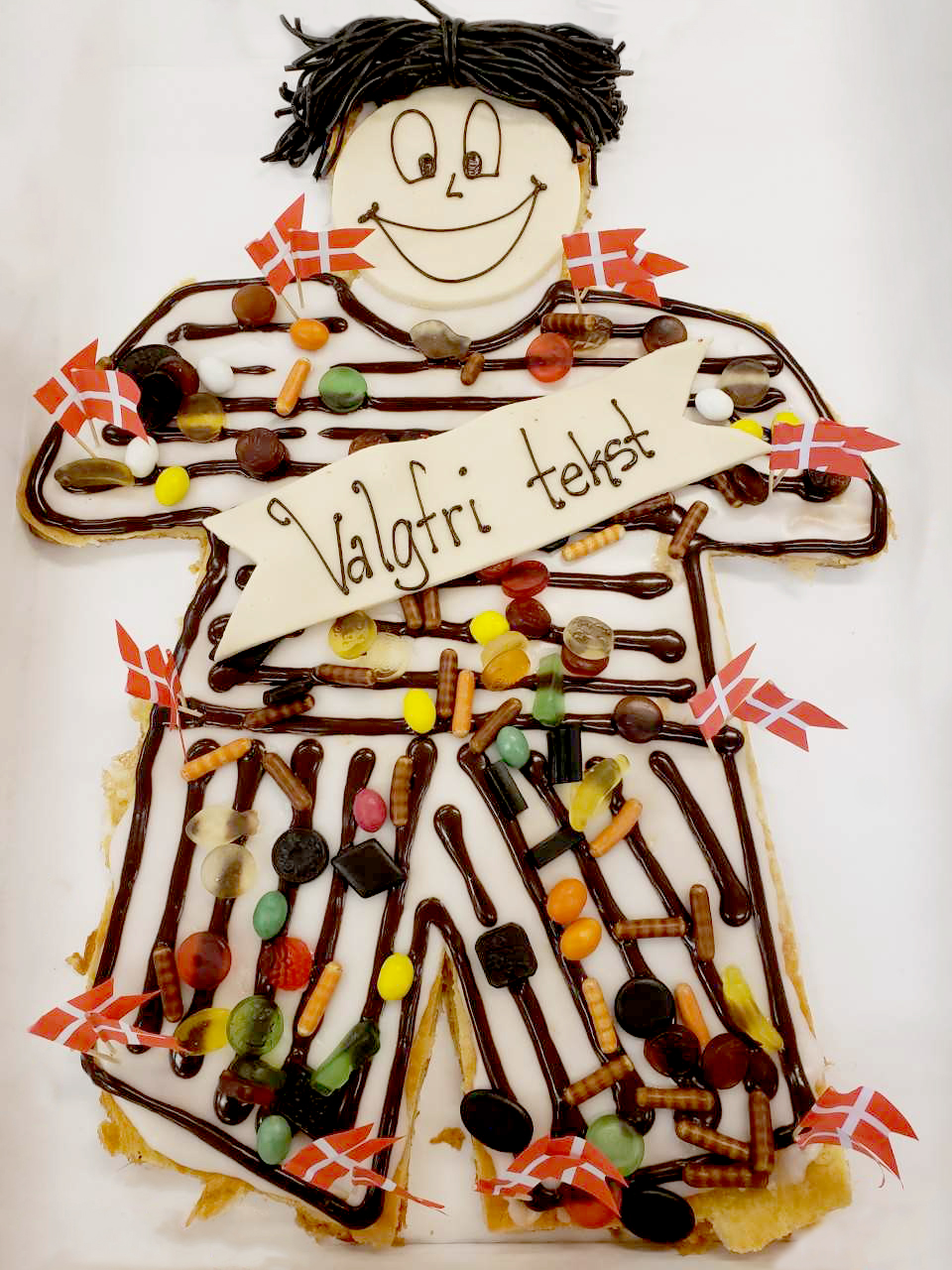 What is Kransekage? It is another popular Danish cake, but this one is only made on New Year’s Eve. Meaning “wreath cake” in English, Kransekage is a cake made of baked marzipan rings stacked on top of one another. 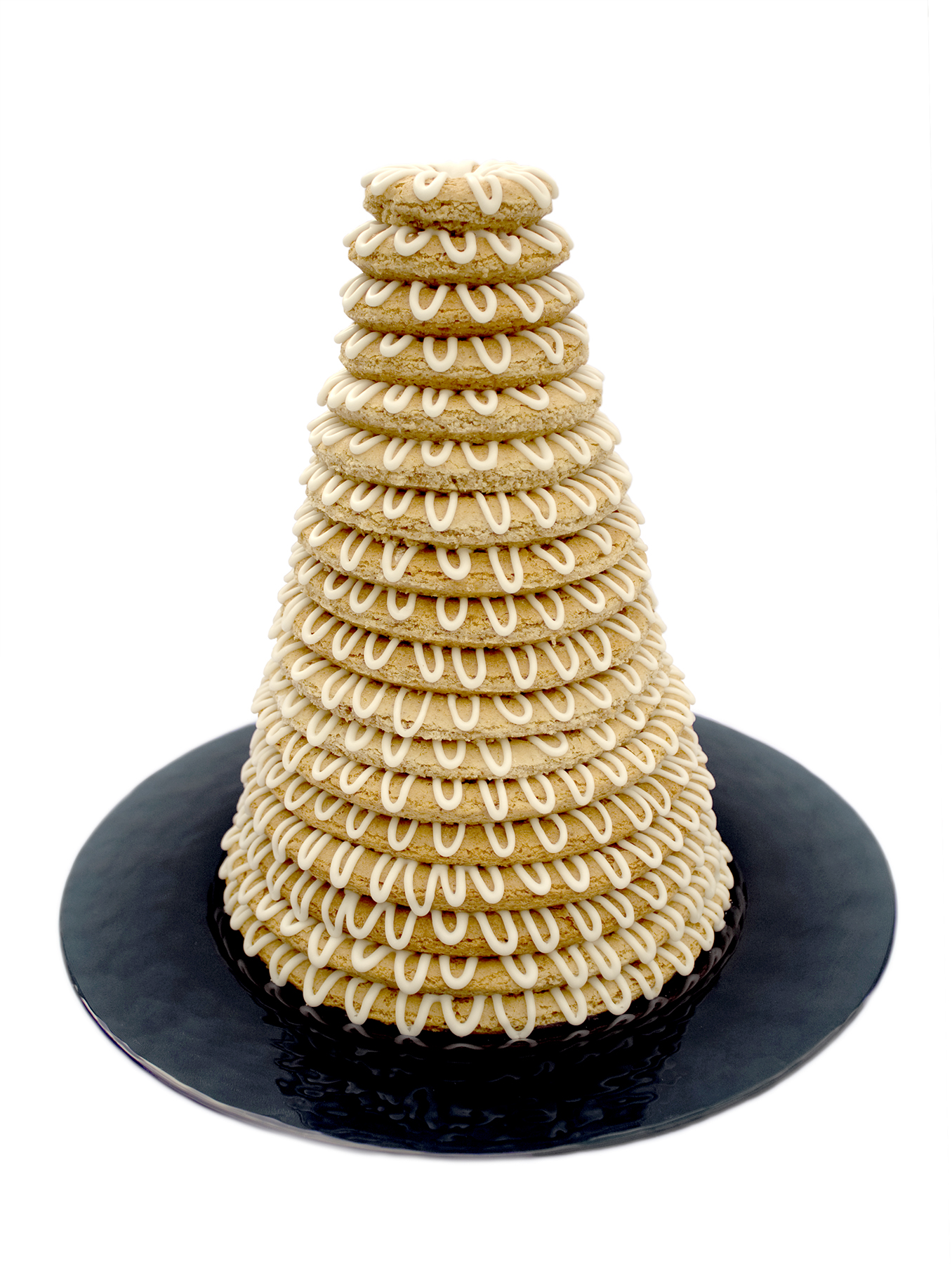 Kransekage is not really a cake; it’s more of a confectionary. It is a mainstay of Danish New Year’s Eve celebrations.